A WWI Cover with Many Interesting Markings

An official letter from the Luxembourg government Service Officiel Renseignements [Information Agency] posted shortly before World War I ended. It was sent to the Red Cross Agency in Geneva, Switzerland, after having been opened and censored by the German military censor in Trier, Germany.

The many markings and notations document the diligent work by the Red Cross to provide information on victims of war.   For more about the Red Cross in World War I, see my post here.

Here are scans of some of the markings:

Posted by Arsdorf at 1:28 PM No comments:

Sole Use of the 2½-Fr Marie-Adélaïde Definitive on an International Money Order in 1921!


I never tire of Ferdinand Schirnbock’s master engraving of the vignette of Grand Duchess Marie-Adélaïde on her 1914 definitives.   So you can imagine my pleasure when I discovered a sole use of the second highest denomination of the set—the 2½ F value, in a South American dealer’s stock. 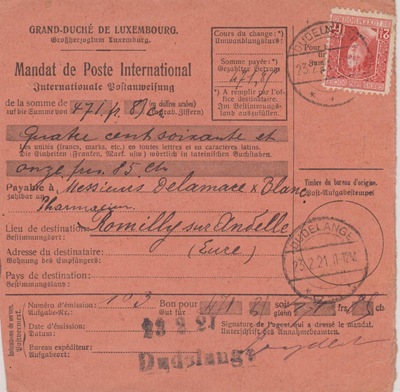 In 1921, a money order not exceeding 500 francs could be sent to France for a fee of 25 centimes per 50 francs (or fraction thereof) of value.  Thus, this money order for 471.81 francs cost 10 times 25 centimes, the sum exactly equaling  2.50 francs, which was nicely paid by the 2½ F Marie-Adélaïde definitive. 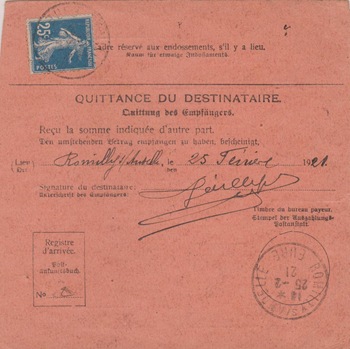 Acquiring this gem was fraught with a couple unusual setbacks.


When the money order ostensibly arrived by registered mail, my local post office failed to leave a pickup notice in my post box.  Only several months later when I interrogated the postal clerks did they discover that they had failed to prepare a pickup notice for the letter.

However, that was not the end of the story.  When I opened the registered letter that had been languishing in the Bangkok post office, I found that the South American dealer from whom I had purchased the item had mistakenly sent a set of Austrian proofs, not the international money order!

Happily, after a telephone call to the dealer, the item was found still to be in the dealer’s stock.  I was glad eventually to receive it, and presumably the dealer was happy to have his Austrian proofs back.
Sometimes we sweat bullets waiting for rare items to arrive in the mails.
Posted by Arsdorf at 2:41 PM No comments:

Luxembourg postal stationery from the middle period (the Allegory, Adolphe, and modern Arms issues) lacks the printing varieties found on the classic stationery.  However, it is rich in postal history, providing an abundance of rates and markings.  And specimen stationery like that seen below will ensure that your middle-period stationery collection doesn’t become boring.

Beginning in the mid-1890s and continuing into the 1920s, the Director of Posts in Madagascar maintained a reference collection of UPU-distributed specimen stamps and postal stationery.  The stationery was glued to folio pages in pairs, which were then tied with a 42 mm. red handstamp reading:

Each folio page from Madagascar’s archival postal stationery is unique.

What other Luxembourg postal stationery exists from the Madagascar archive?  And what exists from other archives, such as the Mauritius archive from which material is now on the market?

Items like this keep philatelic judges awake, even those with diminished vision, but they are not for the budget-minded.

Posted by Arsdorf at 5:19 PM No comments:

Airmail Immediately After the Mixed-franking Era Up to the May 10, 1940 Occupation

As of May 1, 1939, mixed franking was no longer required on international airmail from Luxembourg.  Covers from that date until the May 10, 1940 German occupation are surprisingly scarce.

Here are a few of my favorites:

Posted by Arsdorf at 7:18 PM No comments:

Issued on April 15, 1927, Luxembourg’s first postal viewcards have not been much studied.  Thus, their nine Mondorf-les-Bains views provide a fertile field for philatelic research.

Consider, for example, the 30c fountain view.  I’ve found three variations in the spacing between the stamp imprint and the four adjacent lines of text:

Check your postal stationery collection.  Help me identify more of the varieties on these distinctive postal viewcards!

An Elusive Sole Use of the 2-Franc Postage Due

Sometimes a cover or card that at first glance appears especially ugly offers hidden philatelic beauty upon closer inspection.  Here is an example.

The 2.00 F and 3.00 F green-and-red postage dues are seldom found on either cover or card.  But here is the 2.00 F on a postcard almost “hidden” under the old Junglinster double-circle cancel!

This picture postcard from Vienna, Austria, was sent unfranked on August 13, 1935, to Junglinster, thus incurring double the
one-franc UPU postcard rate as postage due.

Knowing that I’ll likely never see another sole use of this stamp on a postcard, I can overlook the stains, heavy cancel, and undisciplined pencil handwriting.  Fortunately, I didn’t overlook the card itself!

The stamp, off cover as a used single, catalogs nine euros in my 2007 Prifix catalog.  How many do you have in your collection on cover (or card)?

Posted by Arsdorf at 3:30 PM No comments:

Incoming mail is under-appreciated and little collected.  There are no catalogs or pricelists of such mail.  But fortunately Luxembourg, being an uncommon destination, is often mentioned in web and auction sales descriptions, enabling the astute collector to find covers like the one I show here, which just arrived today from a seller in Belgium.

Small Iowa communities like Carroll were favored by Luxembourg emigrants.  The Carroll post office was opened in 1883.  The town was named for Charles Carroll of Maryland, the only Roman Catholic signer of the Declaration of Independence.  You can accumulate a nice showing of 19th century incoming mail from these small towns, often sent to even smaller towns in Luxembourg.  Give it a try!

The cover also illustrates the efficiency with which mail was transported during that era.  Today it can take 10 days for a letter to travel across the town I live in!

Last, the hinge and glue remnants on the back flap remind me that the cover has been appreciated by others.  I hope someday I’ll be able to pass it along to others who will enjoy the Christmas colors!

In English, of course, the translation would be “Augsburg Commission for Returned Letters.”

Posted from Augsburg, Bavaria, March 3, 1898, to Diekirch via Luxembourg-Gare, March 4, 1898, the incoming letter was underpaid and therefore marked ‘T’ for taxation in Luxembourg [blue crayon ‘25’ with m/s ‘12½’].   But apparently the addressee refused to pay the tax (or perhaps could not be found), so the tax was cancelled [red ‘Déboursé’ oval] and the letter redirected back to Augsburg, where it arrived on March 6, 1898.

In Augsburg, the letter had to be opened to ascertain the sender.  This was the task that the Kommission für Rückbriefe performed, dutifully opening and resealing the letter and returning it to the writer, this time taxed in blue crayon ‘20’ on front and back!

Other German cities used similar seals to reseal mail that had to be opened before it could be returned to the sender.

Posted by Arsdorf at 3:42 PM No comments:

Years ago, we often enclosed an addressed return envelope or postal card as a courtesy to our correspondent.  Perhaps that is the explanation for this postal stationery curiosity.

I base my inference on the fact that the handwriting on the front and back does not match.  This suggests that the card was already addressed when the Austrian sender received it (presumably to post a reply).

Sadly, the card has been poorly preserved.  Nonetheless,  it’s a keeper, possibly unique.

Like the 98%, the advertising postcard below could not escape the tax collectors either:

Sent on January 9, 1925, from Molsheim in the Alsace to a hardware store in Ettelbrück, the printed advertisement on the back introduces the company’s representative and boasts of the gold medals it has earned.  Unfortunately, despite the gold medals, the card is underfranked five centimes, as the 10-centime Pasteur definitive is insufficient to pay the 15-centime postage rate for postcards sent as printed matter.

Upon arrival the next day in Ettelbrück, the five-centime deficiency was rounded up to the 30-centime minimum charge then in effect.  The postman has written (in French) that the addressee refused the card because of the 30-centime tax.  So be it!  The tax was cancelled, as the nicely struck red oval déboursé mark indicates.

And then the underfranked card was returned to Molsheim [blue crayon:  “retour”], arriving on January 12, 1925, where the sender was required to pay the 30-centime tax that had gone uncollected in Ettelbrück.

Little did the addressee know that their tax resistance would produce this wonderful multi-colored piece of postal history!

Although the postcard rate to Luxembourg was 20c, this commercial postcard, sent from Brussels on January 15, 1924, was franked only with two Belgian definitives totaling 13c.  The 7c deficiency was doubled and rounded up to 15c tax with the first and second issue postage due stamps postmarked Luxembourg-Ville, January 17, 1924.

However, the postman has indicated in manuscript that the addressee refused the card on January 16th.  Therefore the tax was cancelled [red oval “Débourse” mark”] and the card returned to Brussels [rectangle: “Retour”], where the 30c minimum tax was imposed on January 19th.

Presumably Luxembourg should also have applied the minimum tax rather than 15c as the 30c minimum between the two countries was still in effect.  But in this instance, it didn’t matter.

Where does this strange beast belong?  In a Marie Adélaïde collection, a World War I postal history collection, a Luxembourg postage due collection, or perhaps even a collection of privately printed postal stationery?  Or maybe just in a binder of curiosities?

Posted by Arsdorf at 3:39 PM No comments:

PC 37 was designed by Ludwig Kurz in Frankfurt and printed by Pierre Bruck in Luxembourg in a quantity of 30,300 cards.  Issued on November 17, 1879, two varieties are known:  on the first type, the distance from the Coat of Arms to the first address line is 8.75 mm; on the second type, it is 11.50 mm.

The example shown here with the cliché inverted is the first type.  There is no mention of it in the literature I’ve seen.  Who knows more about its origin?

Posted by Arsdorf at 1:31 PM No comments: