Airmail to the Élysée Palace for Exotic Dancer Erna Carise! 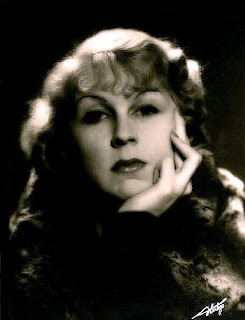 Erna Carise was a Viennese dancer who performed in the late 1920s and 1930s across Europe with Josephine Baker and Marga Berndt. This account in German at www.marga-berndt.de provides pertinent background information:

This letter was sent to her from Luxembourg-Gare in the early afternoon (1:00 - 2:00 p.m.) of Friday, June 23, 1933, by airmail, addressed to the Elysees Palace (actually to the Palace guest residence at 12 rue de Marignan) in Paris. 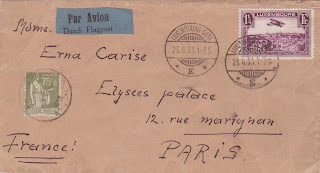 Curiously, the sender (whose Brussels return address appears on the back flap) chose airmail service when direct airmail service from Luxembourg was not yet available. Until May 1, 1939, airmail letters were sent by surface transport to the closest French, Belgian or German airport best serving the letter's destination. In addition to surface rate Luxembourg franking, these letters also required foreign franking of the country of airmail dispatch sufficient to pay an airmail surcharge. For this purpose, French, Belgian and German stamps were available at Luxembourg post offices. The relevant currency conversions appear in the Basien-Hoffkamp rate book.

Here the 1.25 F Luxembourg airmail stamp ironically pays the surface rate, and the 75c French Allegory definitive pays the 75c French airmail surcharge. The letter appears to have gone by surface transport directly from Luxembourg to the Paris airport, as evidenced by the June 24, 1933 Paris R.P. Avion hand cancel on the 75c stamp and the 6:00 a.m. June 24 Paris R.P. Avion machine cancel on the back. Even quicker delivery might have been achieved if the sender had chosen special delivery instead of airmail service. And unfortunately we don't have the contents of the letter to the then very popular exotic dancer, which might explain the sender's urgency!

Shown below is the more typical routing through Strasbourg for airmail from Luxembourg to Paris during the 1930s: 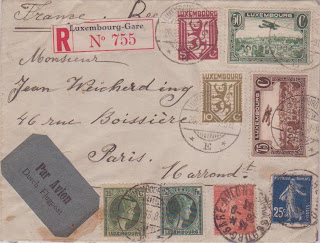 Again the Luxembourg franking pays the 1.25 F surface rate (and the 1.75 F registry fee) with the 25c and 50c French Sower definitives paying the airmail supplement. The letter was posted from Luxembourg-Gare on the morning (8:00-9:00 a.m.) of September 26, 1933, and was received at the Strasbourg airport at 15:00 (3:00 p.m.) later that day. It departed the Strasbourg airport an hour later (Strasbourg-Gare Avion backstamp, 16:00 (4:00 p.m.)) and shows a Paris distribution backstamp the next morning.

Perhaps because the Carise letter was posted in the afternoon, the Luxembourg routing clerk might have thought or knew it would miss what must have been a late afternoon flight from Strasbourg to Paris and that therefore it would travel more (or just as) quickly by train to Paris.
Posted by Arsdorf at 3:18 PM No comments:

Grand Duke ’s fourth grand duke, reigned from until . The fourteen G.D. Adolphe stamps perfined officiel diagonally for use of government mail appeared in 1899. They are listed in the European catalogs, but Scott does not assign a number to them, merely noting their existence.

The sole use of the 4-centime Adolphe perfined official here on a wrapper for printed matter is interesting for three reasons:


The Grand Duke’s name is preceded by the number “1” on the printed address strip, which might have been taken from the Fire Department’s membership list. Postmarked at Luxembourg-Ville, ?, the wrapper is addressed with a distinctive purple rubber stamp “Schloss Hohenburg Oberbayern.”
Posted by Arsdorf at 12:57 PM No comments: