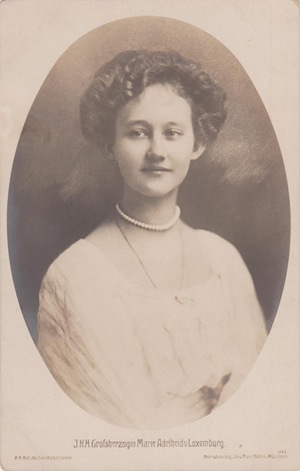 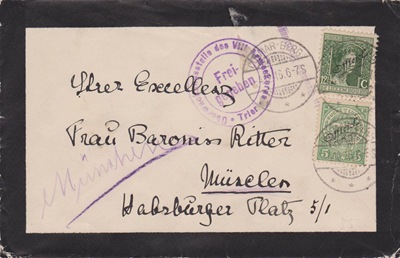 Mourning Cover in the Hand of
G.D. Marie-Adélaïde

Who was Grand Duchess Marie-Adélaïde mourning when she posted this cover from Schloss Berg at Colmar-Berg on December 4, 1916,  to the Baroness Ritter in Munich, Germany?  Perhaps I'll find the answer in Edith O'Shaughnessy's detailed biography of the Grand Duchess, or maybe a reader of this blog will offer a suggestion. 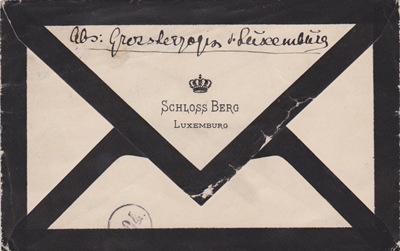 Marie-Adélaïde's distinctive handwriting sometimes perplexed postal clerks.  Here someone, after deciphering the cover's destination, has written München in colored pencil across the front with strong underscoring!

Indeed, Edith O'Shaughnessy, in her fine biography, Marie Adelaide: Grand Duchess of Luxemburg Duchess of Nassau (1921: Harrison Smith, New York), tells us that it was Marie-Adélaïde's paternal grandmother, Adelheid-Marie of Anhalt-Dessau, for whom Marie-Adélaïde was in mourning when she posted this cover (pp. 139-140).  She writes:

Towards the end of October, 1916, Marie Adelaide left her Duchy for the first time since the outbreak of the war.  It was to go to Königstein, near Frankfurt, the estate that years before the Grand Duke Adolf had given to his consort, Adelheid Marie of the House of Anhalt.  There she stood by the bedside of that mortally-stricken, beloved figure of her childhood, of her adolescence, of her reign.  Again on November 20th, she went to bury her.

Adelheid-Marie, seen in the images below, was born in Dessau on December 25, 1833, and died at Schloss Königstein on November 24, 1916.  Sadly, Marie-Adélaïde's visits to her dying grandmother were used by her political opponents as evidence that she had been sympathetic to Germany during World War I. 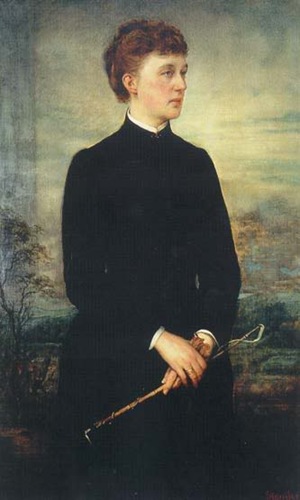 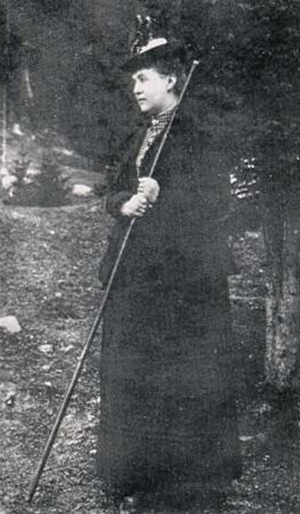 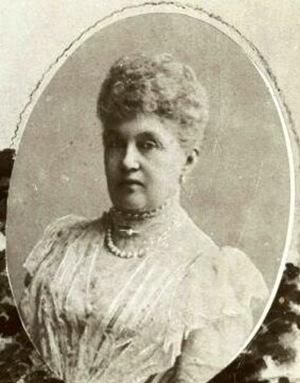 Posted by Arsdorf at 7:19 PM No comments: 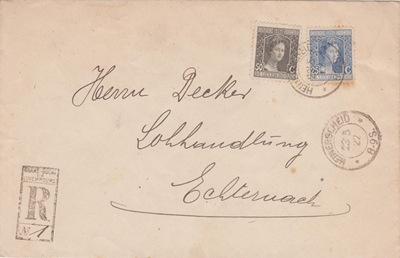 License plates with low numbers are much sought after.  But what about covers with low registry numbers?  Aren't they just as desirable?  Well, you'll have to decide.

I also like the usage.  The cover was posted at Heinerscheid, May 23, 1922.  The Heinerscheid FSPL type 32 double-circle cancel is uncommon, even though it was used from 1910 until mid-October 1940.  (Heinerscheid was never issued a type 33 bridge-and-bar canceler.)  The cover was backstamped at Echternach the next day -- May 24, 1922. 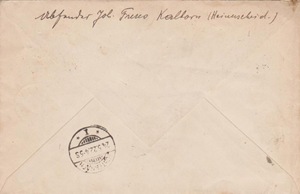 Posted by Arsdorf at 1:24 PM No comments:

A railway cancel in manuscript! 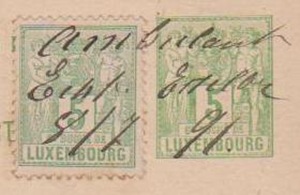 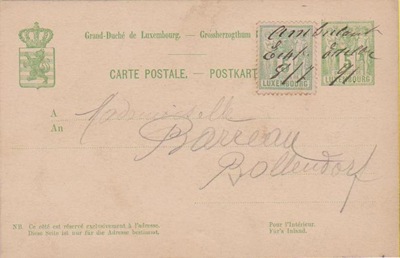 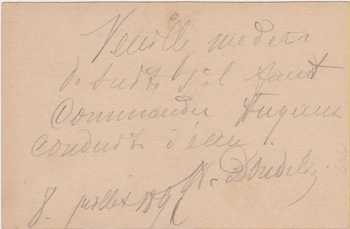 As a long-time collector of Luxembourg railway cancels, I can't recall ever before seeing a railroad cancel rendered in manuscript.  But here is a recently-acquired 5c Allegory (3rd series) postal card with such a cancel from the Echternach-Ettelbrück TPO.

This rail line made its way from Echternach to Ettelbrück, passing by Weilerbach, Bollendorf, Grundhof, Dillingen, Wallendorf, Reisdorf, Moestroff, Bettendorf, and Gilsdorf.

Here's an example of the cancel: 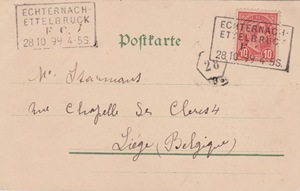 Why was the card uprated to 10 centimes?

The card is uprated to ten centimes, so I assume the destination was the village of Bollendorf in Germany on the left bank of the Sauer river, opposite Bollendorf-Pont on the Luxembourg side.

The addressee is a Mademoiselle Barreau, perhaps residing at the Bollendorf Waldvilla Barreau seen on the postcard below: 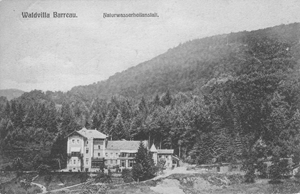 This card would fit nicely into an exhibit of either railway cancels or Allegory postal stationery.  Maybe that's why it was so expensive! 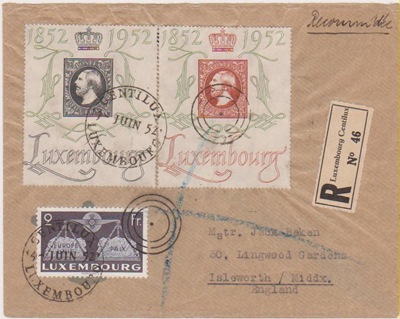 This is a correctly franked cover posted from the Centilux philatelic exhibition on the last day of the show, June 4, 1952.  The Centilux tête-bêche pair and the 2 F Europa commemorative pay the 4-franc UPU letter rate and 4-franc registry fee.  The oval backstamp documents the cover's arrival at Isleworth, Middlesex, England, June 7, 1952.  And so it's a nice modern postal history cover.

But it's a lot more.  As a young collector in the 1960s, I enjoyed putting together a modest Liechtenstein collection.  In those days, long before the advent of Internet technology, obtaining philatelic information and solving philatelic mysteries required dedicated correspondence with knowledgeable senior collectors.  One of the kindest and most helpful was the late Jack Beken, the British gentlemen and Liechtenstein philately authority to whom this cover is addressed.  No matter how naïve or elementary the question, Jack Beken always provided a satisfying answer.  It was a sad day in 1977 when I learned that this distinguished philatelist had died. 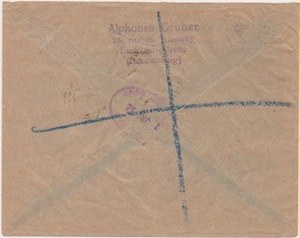 I sold most of my Liechtenstein material long ago to finance Luxembourg purchases, but the eight-stamp block below remains.  When I acquired the block for $6.00  from a Matthew Bennett auction in the 1960s, I was clueless why it was imperforate and ungummed.  Of course Jack Beken had the answer -- it's a proof! 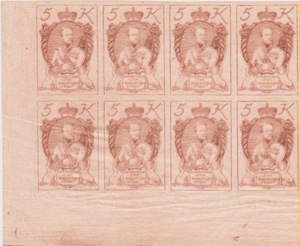 Now we have ever fewer devoted philatelic authorities like Jack Beken.  When there is none, philately will be remembered mostly as a curious pursuit rather than the learned endeavor it is.

Posted by Arsdorf at 7:33 PM No comments: 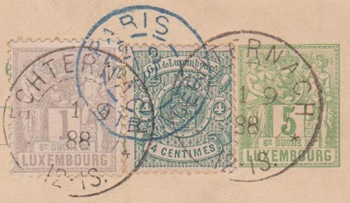 Luxembourg's classic postal stationery ends with the last Coat of Arms issue in 1881; the neo-classics begin with the Allegory stationery in 1882. 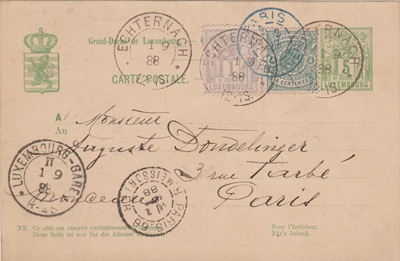 Judging by the long message on the back, use of the 4c Arms definitive was an act of frugality, and not a philatelic creation.  The card left Echternach on September 1, 1888, between 12:00-1:00 p.m., transited Luxembourg-Gare a few hours later, between 3:00-4:00 p.m., and arrived in Paris the next day.  There is a blue-green Paris Etranger cds tying the two stamps to the card and a Paris (66) R. Meissonier delivery cds. 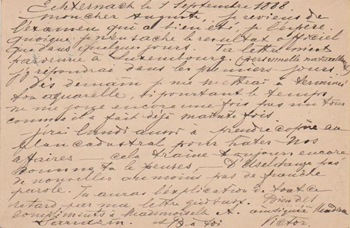 There's really nothing that I dislike about this card. I think even those collectors whose nose takes a downward turn when postal stationery appears will appreciate and enjoy it.

Posted by Arsdorf at 8:38 PM No comments: