An exhibit of invalid Luxembourg frankings would leave most philatelic judges stupefied.  How would they assess the philatelic significance of such material?  Would they consider all such uses to be “philatelically contrived?” And what criteria would they apply to the “challenge factor?”

Consider that finding invalid Luxembourg frankings is much more difficult than finding multiples of Luxembourg #1 on cover, and philatelic knowledge is more useful than a plump bank account.  But as we should know, philatelic judging is subjective; the equal interval point scale used at the FIP level is illusory.  It makes a mockery of the logic of measurement.  So don’t necessarily expect to be rewarded with medals when you discover these rarities!  Sadly, they are elusive but little appreciated.

After more than 50 years of sniffing through dealers’ junk boxes, my album of invalid uses is still pretty thin.  Here is the only example I’ve found of double invalidity: 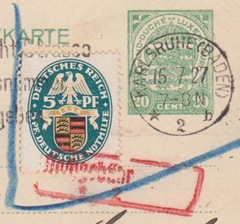 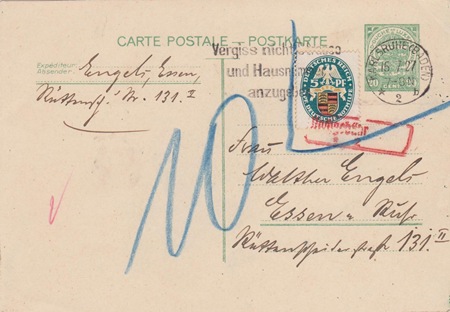 Luxembourg postal stationery, regardless of validity, of course could not be used within another country.  Even the reply cards from double cards had to be returned to their country of origin.  But what about the German semipostal stamp?  It was issued on December 1, 1926; however, it was only valid until June 30, 1927.  Here it is used 15 days too late, on July 15, 1927.  Thus, both the Luxembourg postal stationery imprint and the German semipostal stamp are invalid, albeit for different reasons.

Kudos to the sharp-eyed German postal clerk in Karlsruhe who taxed the card double the German domestic postcard rate and marked off both the stamp and the stationery imprint as invalid! 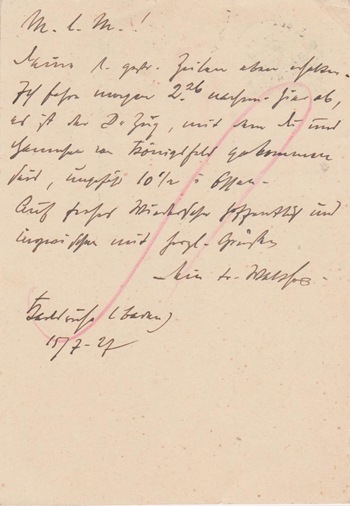 Posted by Arsdorf at 1:50 PM No comments:

Mail to the Red Cross Prisoners-of-War Agency in Geneva

But what additional meaning does the mysterious green label provide?  Was it applied by the AIPG in Geneva?  For what purpose?  Without answers to these questions, the cover’s postal history will remain incomplete.

The label is perforated on the left hand side.  The number ‘38,’ the letter “B,” and the name ‘Melle Ch. Lachenae’ have been added in manuscript.

The International Prisoners of War Agency

Wikipedia tells us that the AIPG was a service of the International Committee of the Red Cross (ICRC) and was founded in 1914. During World War I, the AIPG established an office in Geneva at the Rath museum for a finding prisoners and displaced people of all nationalities (even though there was no convention protecting civilians at the time). It allowed them to contact their families and send mail and parcels, bypassing barriers between warring countries.

AIPG at the Rath Museum

The images below show the AIPG’s typing and file rooms, which employed about 100 persons around 1918.  Notice the extensive card files in the second image. During the war, according to Wikipedia, the war the Agency prepared 4,805,000 index cards and dispatched 1,854,914 parcels and consignments of collective relief.

Surely those of you familiar with the International Red Cross can explain the use of these distinctive green labels!

Posted by Arsdorf at 4:08 PM No comments: 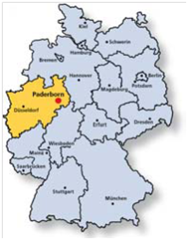 Although I’ve collected Luxembourg postal stationery for more than a half century, I’m amazed at how frequently I still find new material that belies easy explanation.  Consider this card: 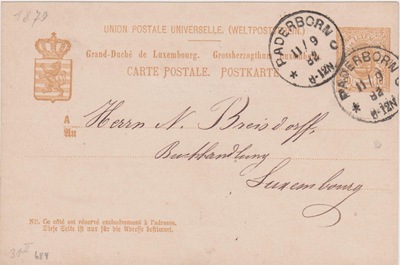 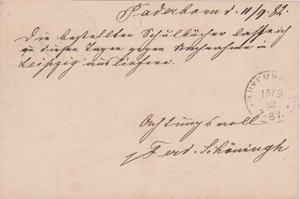 Yes, it’s the August 1879 10-centime German treaty rate and UPU-rate card from the 10th Arms Issue, which appeared in August 1879 and is easily identified by the elongated ‘P’ of POSTALE and POSTKARTE in the third text line[Prifix & FSPL Handbook No. 35] .  But here it has been commercially used from  Paderborn, a university town in East Westphalia, Germany.  The Paderborn cds is dated September 11, 1882.  The card is addressed to the Breisdoff bookstore in Luxembourg-Ville (a business that saved many fine incoming postal stationery cards!), and backstamped at Luxembourg,
September 13, 1882.

I suppose I should attribute this unusual use simply to postal clerk compliance and be done with it.  But the German postal clerks of this era seldom failed to tax improper uses of stamps or stationery.

Therefore, an alternate explanation might be that the postal clerk mistook this card for the reply card of the double card from this issue [Prifix & FSPL Handbook No. 36].  The design is similar, featuring the distinctive elongated P’s, as seen in the example below. 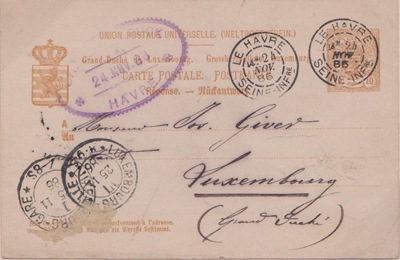 Posted by Arsdorf at 7:52 AM No comments: