Overlooked Rates—Post-WW2 Treaty Rates to Italy and the Netherlands

Beginning in the late 1940s, postal treaties provided for substantially reduced postal rates from Luxembourg to Italy and the Netherlands.  Although commercial covers from this period are plentiful, I’ve had a hard time finding treaty-rate covers to these two countries.  How many do you have in your collection?  Take a look!

For example, here are some of the post-WW2 rates for a 20g letter: 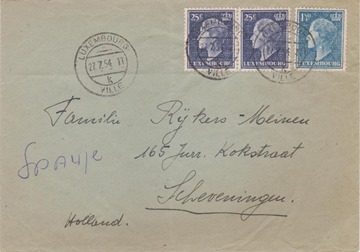 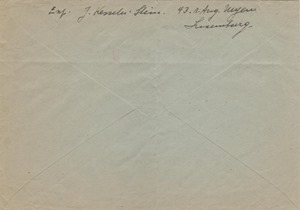 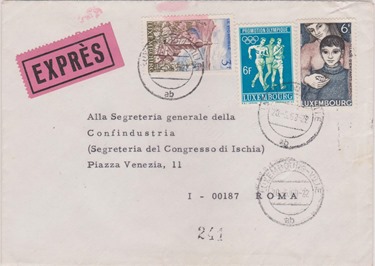 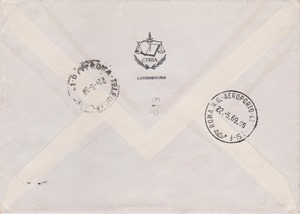 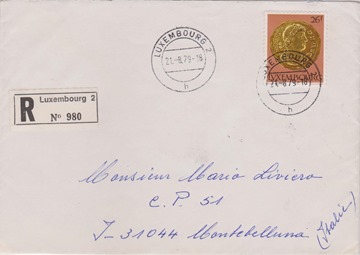 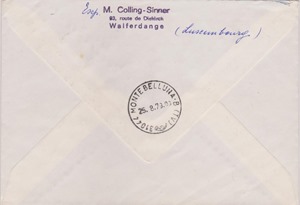 Posted by Arsdorf at 2:28 PM No comments: In early 1918, World War 1 was winding down. Due to wartime demands, paper shortages were widespread. Here’s how the government responded when Enschedé in Holland temporarily lacked the paper needed to print government orders for the then-current Coat of Arms postal cards.

Before distributing the obsolete cards, the government invalidated the stamp imprint with a three-concentric-ring obliterator and instructed postal clerks to add adhesive stamps. 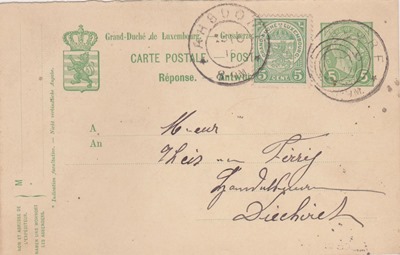 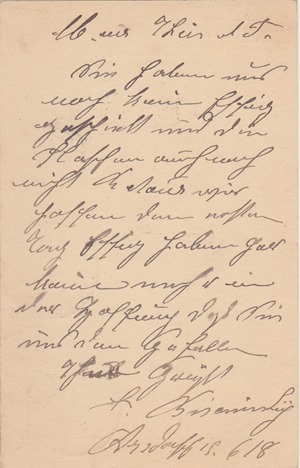 This emergency use of the 5c Adolphe Reply card (3rd issue) is notable for three reasons:

First, the third issue of Grand Duke Adolphe postal stationery appeared during the latter half of 1906 (August 1906 is the frühdatum listed in the FSPL handbook), well after Adolphe’s death in November 1905.  It was superseded about a year later, in July 1907, by the Coat of Arms postal stationery.  As a consequence, even the 5c and 10c third issue cards are uncommon, and commercial uses of the third issue 5c+5c domestic and 10c+10c UPU cards are seldom seen.  Here the 5c reply card has been recalled from storage and invalidated with the three-concentric-ring obliterator, with a 5c Coat of Arms stamp added to pay the domestic-rate postage.

Second, unlike many emergency uses of the obsolete stationery, the 5c stamp was applied next to rather than over the invalid 5c stamp imprint.  And just to be safe, the Arsdorf postal clerk canceled both the stamp and the stamp imprint!

And third, obsolete cards were only distributed to post offices whose supply of postal cards had been depleted. This is the first example recorded as written and postmarked at Arsdorf.

A remarkable postal history and postal stationery card, indeed!
Posted by Arsdorf at 11:19 AM No comments: