Uncommon use -- A Postal Card Sent Registered, Special Delivery in 1932! 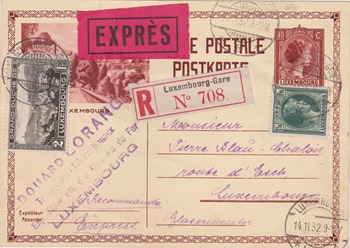 We occasionally see postal cards sent by registered mail or special delivery.  However, use of these two special services for the same card is uncommon.  I like this example! 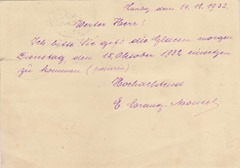 Posted by Arsdorf at 1:59 PM No comments:

The 20c orange GD Adolphe definitive (Yvert 61; Michel 59) appeared in sheets of 100 in 1893.  It is occasionally seen chemically altered, so as to appear to be the unissued 20c brown (Yvert 61a).  And that is also what has been done to the 20c GD Adolphe S.P. official seen on the cover shown below.

The unissued 20c brown was produced in 1891, along with the first two GD Adolphe values (the 10c and 25c) in small sheets of 25 stamps perforate 11½.  As the brown color of the 20c differed from the orange color that had been announced in the government journal Le Mémorial, only the 10c and 25c were initially issued. 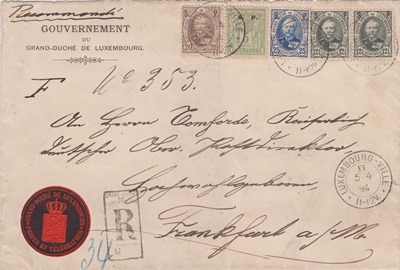 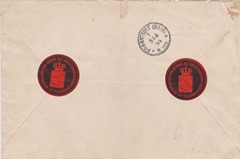 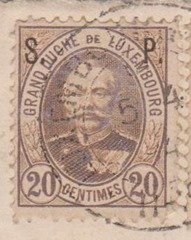 The 20c ‘brown’ overprinted S.P. for official use seen on this cover, however, is perforate 12½, so it cannot be from the 1891 printing.  Also, from chemical treatment the paper shows a slight yellowish tinge, unlike the white paper of the 12½c and 25c stamps seen on the cover.  And under natural light, a little bit of film remains on the 20c stamp from the chemical used to alter the stamp’s color.
*   *   *
Below, you can see the genuine 20c brown (perforate 11½!) used as part of the franking on a registered letter from Grevenmacher to Leipzig in 1905.  It presumably was posted by the mischievous Mr. Wagner, who at one time had acquired all of the unissued 20c brown stamps, and who in the spirit of hanky-panky succeeded in posting a number of registered letters with the unissued 20c brown and other franking.  This cover is one of only a couple 20c brown covers that Wagner posted from Grevenmacher. 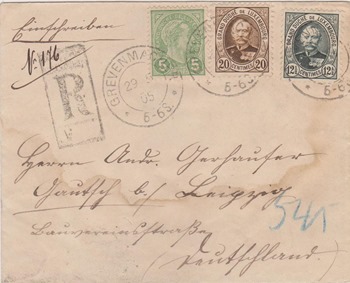 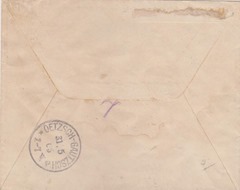 So, call it hanky-panky, hokus-pokus, or skullduggery, whatever you will; as philatelists, we have more to fear than ISIS or the boogeyman!
Posted by Arsdorf at 11:15 AM No comments: