Why is outgoing mail to (and incoming mail from) Ireland so scarce? Updated!

Luxembourg's Allegory postal stationery from the 1880s and 1890s is quite common. This means that you can collect the Allegory stationery by destination. And over the past 50 years, that's what I've done.

One destination that has proven elusive over the years is Ireland.  And that seems strange, since mail from Luxembourg to England is often found.

Thus, for me the two cards shown below are very special. 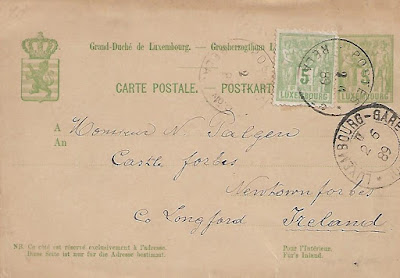 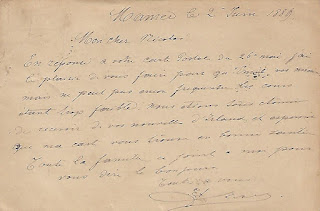 Luxembourg-Ville
to Blackrock, Ireland,
in 1894 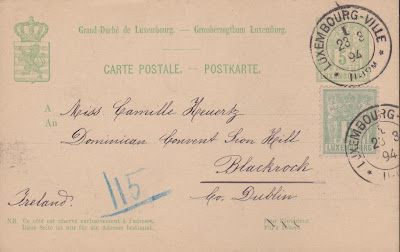 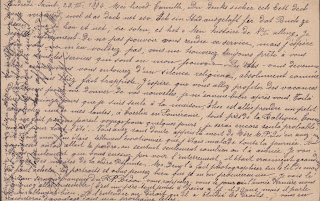 Equally, or even more, challenging is incoming mail from Ireland.  I've seen none from the 19th century, and that is surprising.

I can show only one item, a postcard sent as printed matter to Schifflange on the 7th of March, 1932.  It bears a double-ring Baile Atha Cliath [Dublin] postmark on the address side and a Dublin thimble cancel on the stamp on the view side.  The view shows Grafton Street, Dublin.  The stamp is the 2d 1930 commemorative for the opening of the Shannon River Hydroelectric Station.  The Schifflange bridge cancel is dated 9 March 1932.

Dublin, Ireland,
to Schifflange
in 1932 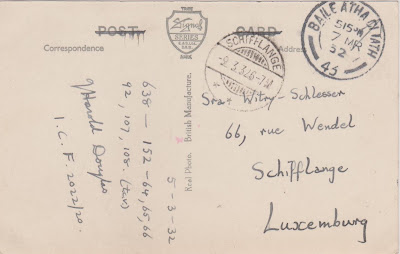 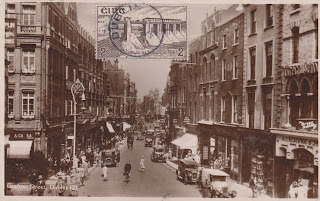 Posted by Arsdorf at 9:24 PM No comments:

The 40-day period in 1921 when the domestic postal card rate exceeded the UPU rate!

On April 1, 1921, Luxembourg’s domestic postal card rate was increased from 10 to 15 centimes.

However, the UPU postal card rate (including the rate to Belgium, France, and Germany) remained at 10 centimes until May 10, 1921, when it was increased to 20 centimes.

Here are a few examples: 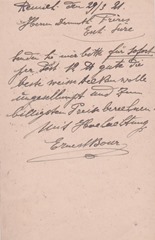 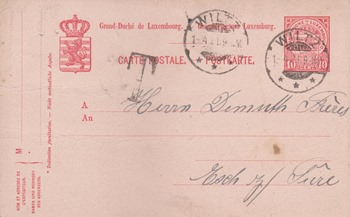 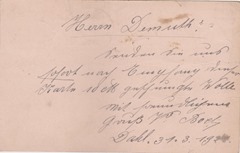 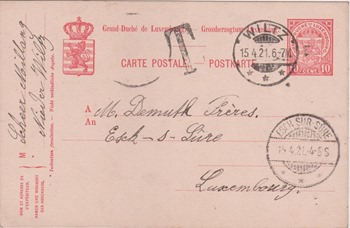 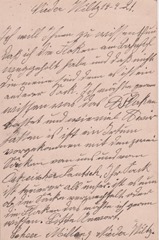 Wiltz
to
Esch-sur-Sûre
(Due stamp removed?) 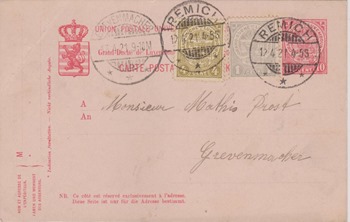 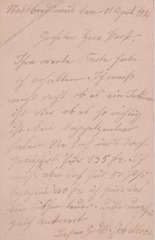 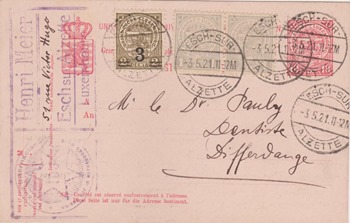 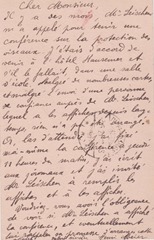 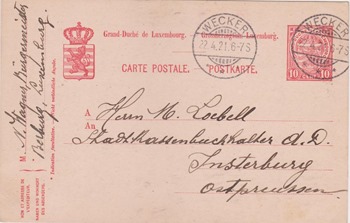 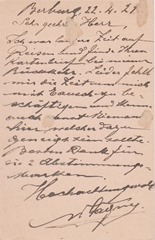 
Watch for postal cards used during this curious 40-day period! They are surprisingly difficult to find. And who has the postcards from this period?

Postal historian Hans-Ulrich Doose has written about the 40-day period in an article entitled “Luxemburger Porto-Ungereimtheiten [English: rate inconsistencies] 1921,” which appeared in Le Moniteur du Collectionneur. Citation to follow.
Posted by Arsdorf at 3:25 AM No comments: