A couple years ago, I blogged about an Austrian postal card incoming to Luxembourg with mimeographed advertising sent as printed matter that was taxed at the postal card rate.  Your will find that December 22, 2014, post here.  A viewer noted that the card was taxed either because the mimeographing looked like handwriting, or because Correspondenz-Karte had not been crossed out and Imprimé or Drucksache added.

Now I've added another incoming Austrian card to my collection.  Shown below, this commercial post card has Correspondenz-Karte crossed out and Drucksache added.  Addressed to the Hotelier at the Hotel Clesse in Luxembourg, the mimeographed text is in light green (front and back).  Only the name of the hotel has been added in manuscript. 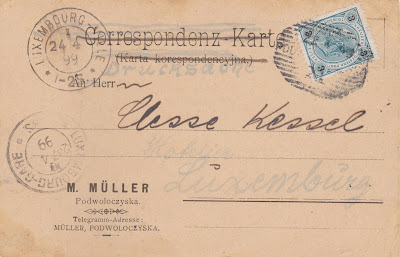 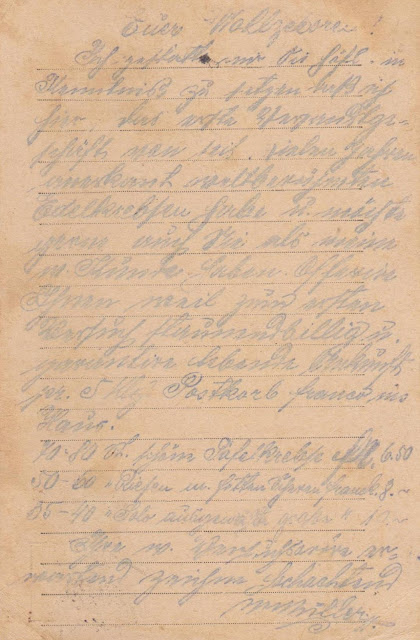 And here is a photo of the Grand Hotel Clesse, Place de la Gare, taken about 1900.  Howard Johnson's Motor Lodges were never this beautiful! 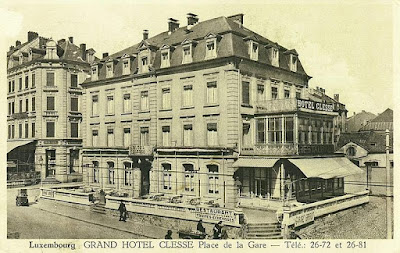 WW2 - Commercial Use of Luxemburg Franking in the Lorraine 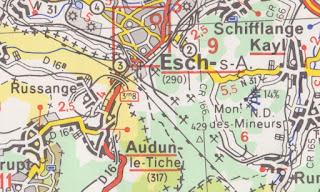 While philatelic uses abound, commercial uses of the 'Luxemburg' Hindenburg overprints in the Alsace or Lorraine during this 275-day period are scarce.  Unlike collectors, commercial entities presumably had and used only the stamps overprinted for their region, but here is a contrary example! 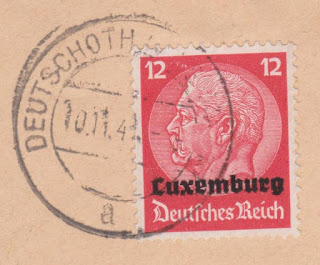 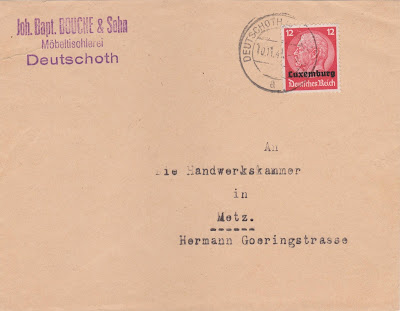 From the map at the top, you will see that Deutsch-oth [today: Audun-le-Tiche] is on the French side of the border, just a few kilometers from Esch-sur-Alzette.  Thus, it would not be surprising that this furniture dealer (Möbeltischlerei) had and used a 12-Rpf. 'Luxemburg' Hindenburg overprint, as shown here, on a letter to the craft guild (Handwerkakammer) in Metz.  Yes, I believe this cover is commercial.  Many others in my collection aren't.

Now here is another example that probably isn't philatelic, although I can't be sure: 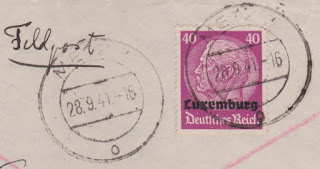 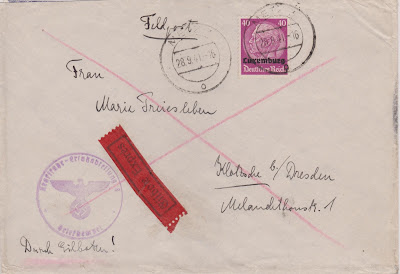 Field Post, of course, was free from letter postage.  Thus, the soldier-sender from the 8th Battalion only had to pay the 40-Rpf. special delivery fee.

As the surnames of the sender and recipient are the same, this well may have been a soldier's letter to his wife or mother.  Why a 40-Rpf. 'Luxemburg' overprint was used instead of a 40-Rpf. 'Lothringen' overprint or Reich franking is unknown.  In any event, a sole use of the 40-Rpf. Hindenburg makes this cover attractive! 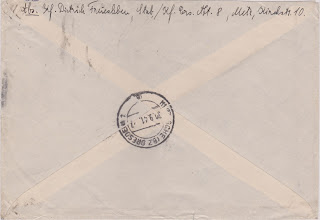 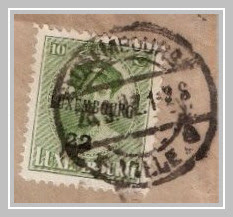 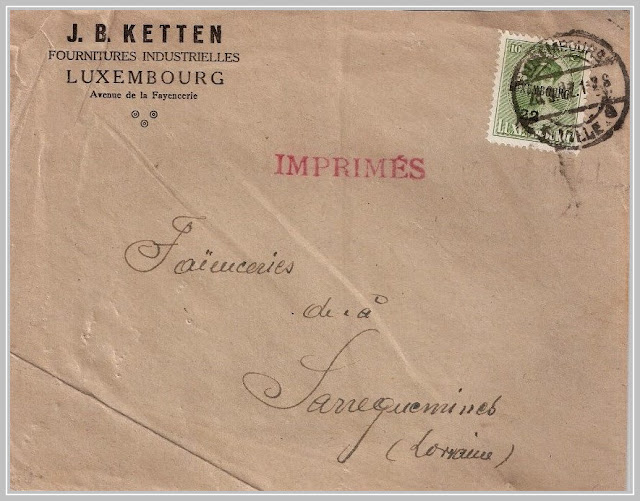 Many Luxembourg precancels are common but uses of any on commercial mail are scarce.  Why?  Well, I believe very little of the printed matter for which they were intended was saved.

We hardly ever see commercial uses of the G.D. Charlotte precancels.  This homely cover with back flap missing is an exception.  Sent by  J. B. Ketten's furniture store from Luxembourg-Ville to France, it sold for 371 Euros + commission on Delcampe in October 2015!

Who has other examples of commercial mail using the precanceled Charlotte definitives in 1922, 1923, 1924 and 1925?  Share your scans with Arsdorf@gmail.com; I'll publish them here. 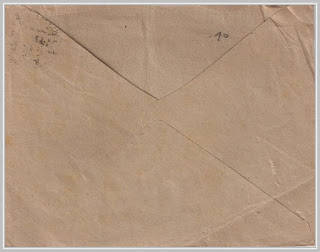 Posted by Arsdorf at 2:12 PM No comments:

In 1935, Maury Swartz, the well known stamp dealer from Kayl, corresponded  with Mr. Hensgen, the Luxembourg-Grund prison chaplain.  Over the four-month period from June 25th to September 30th, Swartz used all 15 of the Intellectual semi-postals (they were sold at double face value) on a nine-letter correspondence.  We do not know exactly what the covers contained, but they appear to be more commercial than philatelic.

I corresponded with Swartz in the 1950s, when he was living in Silver Spring, Maryland, but by the time that I acquired the covers in the 1960s from the Fred Wilmar collection in a Wolffers San Francisco auction, I had lost contact with him.  Wilmar served in the United States Army in Luxembourg during World War 2.  After the war he returned to Moraga, California, where he developed a fine collection of Luxembourg stamps and postal history, including these covers.

Here they are to enjoy: 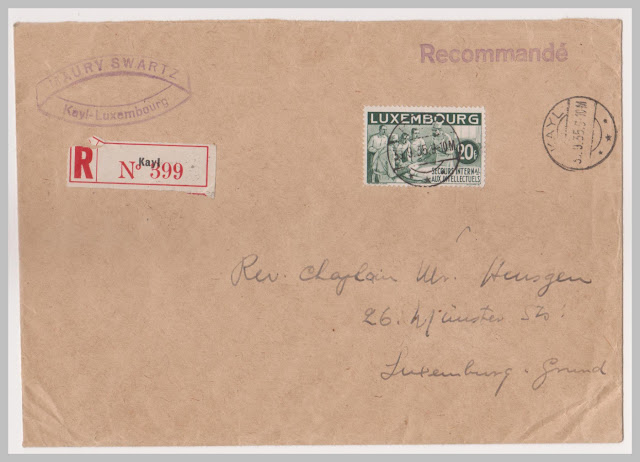 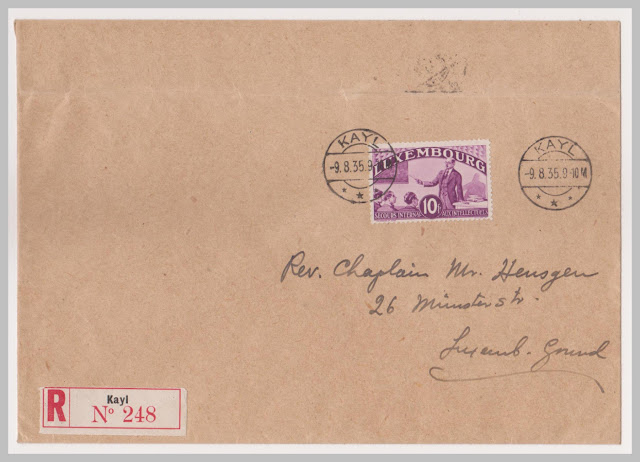 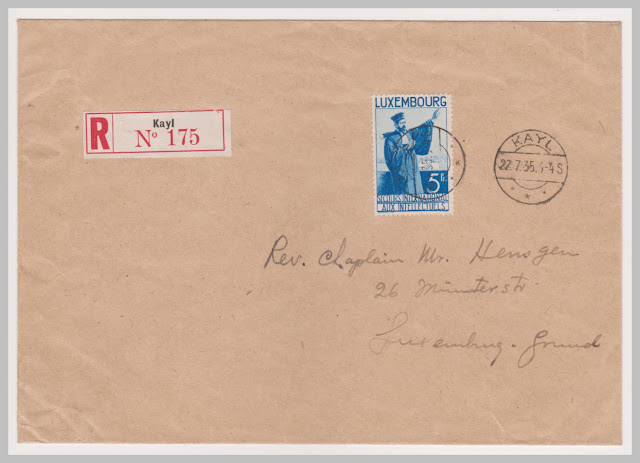 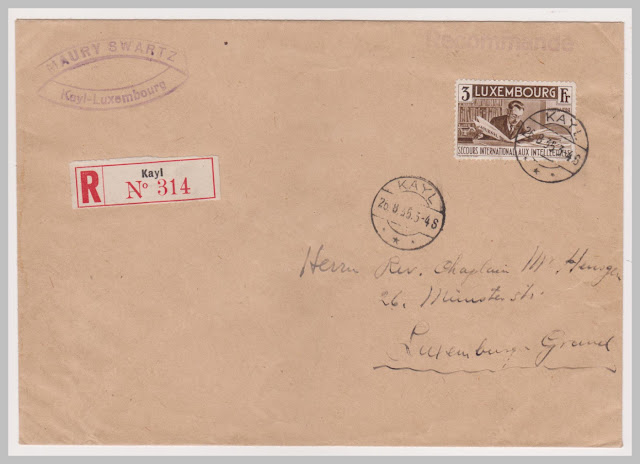 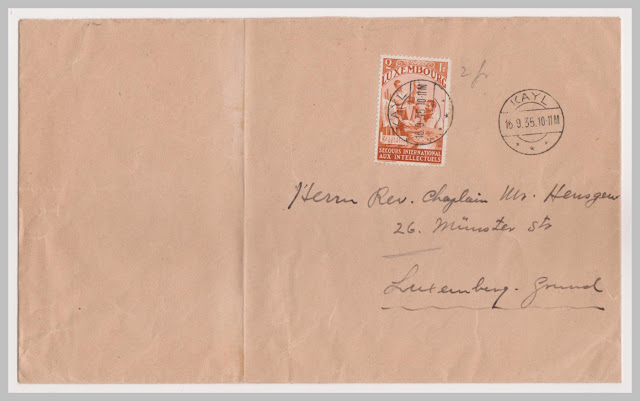 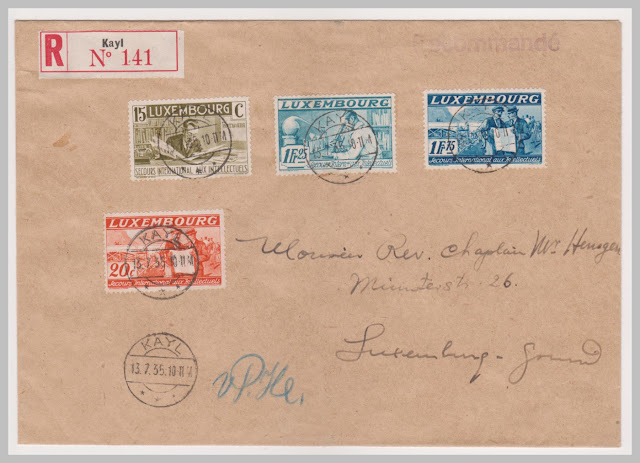 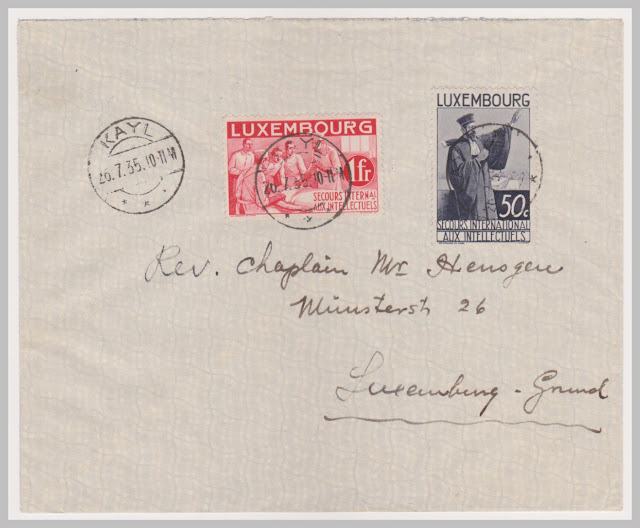 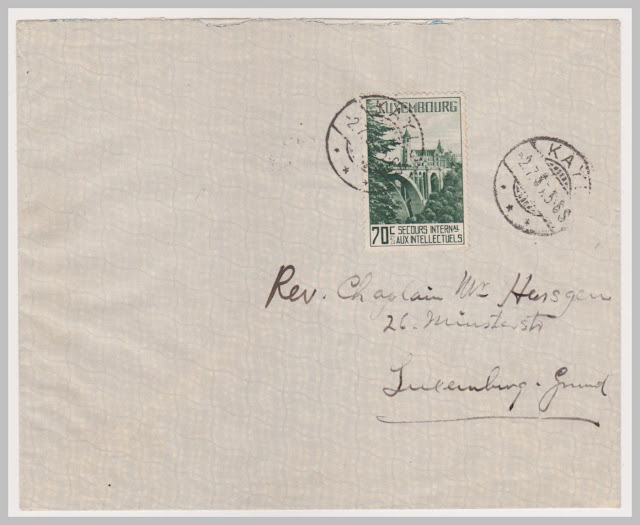 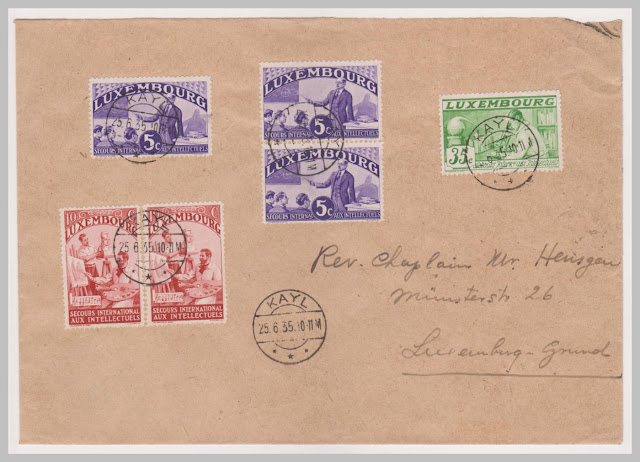