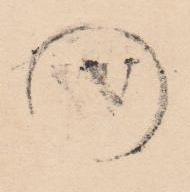 Most of Luxembourg’s neo-classical postal stationery—beginning with Enschede’s mass printing of the 5c and 10c twelfth Arms issue in 1880 [Prifix 39 & 40]—is very common.   Yet, dealers often price it at five or ten dollars a card, apparently thinking that anything from Luxembourg is or must be scarce.  Nonetheless, I always inspect these offerings, hoping against hope to find something unusual and interesting.

Such was the case recently when I viewed a dealer’s web offerings of mostly valueless neoclassics.  There, along with three other cards in a small lot, was the card shown below, written at Breidweiler, February 2, 1883, with the ‘W’ postbox cancel associated with Echternach, postmarked at Echternach that day: 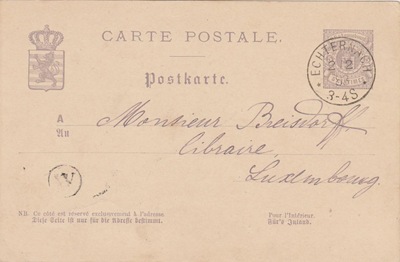 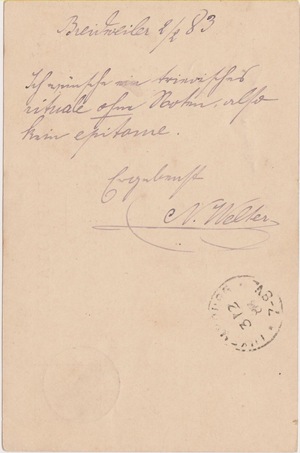 Francis Rhein, writing in The Postal History of the Grand Duchy of Luxembourg (1941), refers to this type of cancel as a “majuscule.”  He notes that these majuscules were rural control marks used by mail carriers who collected mail from small communities that did not have a post office.  According to Rhein, the canceller was attached to the interior of the rural mail box.     Thus, I prefer calling Rhein’s majuscules “post box” cancels.  He  depicts Echternach’s ‘W’ at page 114 of his book.

Presumably the function of the post box cancels was to document the origin of mail deposited in rural post boxes although I’ve never been entirely clear on that point.

N. Poos, writing in Die Post des Groβherzogtums Luxemburg (1950) at p. 418, also refers to these cancels as “majuscules” and offers this historical note:

And he provides a list of these rare control marks authored and published by A. Ungeheuer in 1946.  In that list, ‘W’ is associated with Tuntange, Ansembourg, and Echternach.

Although I’ve searched relentlessly since the 1950s for unusual markings on the neo-classical postal stationery, I’ve only discovered two other cards with a post box cancel.  But that’s the challenge factor of Luxembourg philately.  When you stop looking at common (but often overpriced) Luxembourg postal cards from the 1880s, that’s when you might be missing a chance to make a memorable discovery!

The extraordinarily knowledgeable Luxembourg philatelist, Dieter Basien, has kindly provided a map showing the venues at which post box mail was collected and routed to the Echternach post office and the post box cancels for each postbox: 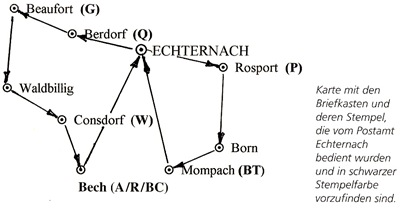 The map shows that the ‘W’ post box cancel was assigned to the Consdorf post box.  This is consistent with the fact that the postal card was written at Breidweiler, which is located in the Consdorf commune. 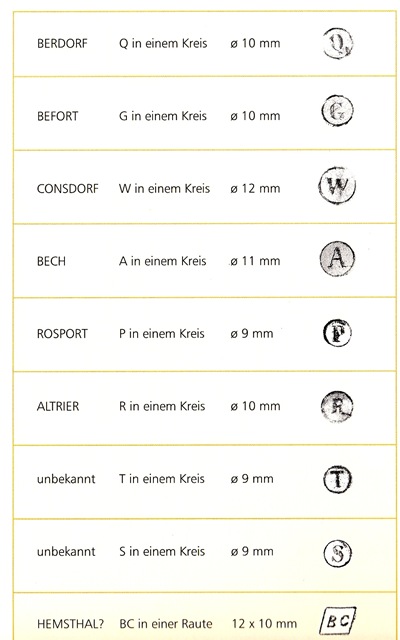 Certainly these post box cancels are among the most exotic Luxembourg postal markings.  So be vigilant; one might be reposing in that box of common postal stationery that you never look at or bother to organize!

Posted by Arsdorf at 5:12 PM No comments: