Giving the early postage dues their do

Here is an example of this rarity, which Prifix does not price.  I don't recall seeing other examples on the auction market or otherwise over the past fifty years.  So, indeed,  as Prifix says, they must be très rares.  Who has seen the other six denominations imperforate or knows more about their history?

So I checked several hundred examples of each of these denominations.  Indeed, about every 50th to 100th example measured p. 13.5 horizontally.  And, unlike the p. 12.5 examples, the vertical perforations consistently measured 12.75 (not 12.5, as listed in Prifix). 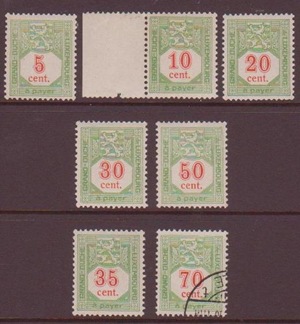 Now to check my covers for this scarce perforation (no, I don't have hundreds of these stamps on cover!). 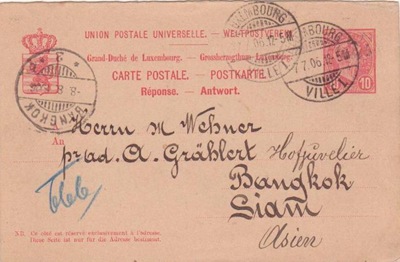 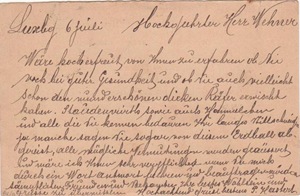 F. Grahlert was the jeweler to His Majesty, King Chulalornkorn. 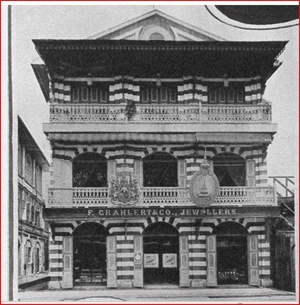 F. Grahlert's shop in Bangkok in the early 1900s

Mr. F. Grahlert came to Bangkok some eighteen years ago as jeweller to his Majesty the King. A few years later he started business on his own account, his shop, which is in close proximity to the royal palaces, being the first of its kind opened in the city. He still enjoys the patronage of his Majesty the King, for the firm are jewellers to the Court by special appointment, and are constantly being entrusted with the execution of important commissions by their Majesties the King and Queen of Siam and his Royal Highness the Crown Prince. The company employs upwards of fifty native craftsmen, who are highly skilled in the art of fashioning gold and silver into articles of most artistic and delicate design, and their work very justly and naturally is held in the highest favour. The firm's premises would well repay an inspection; their stock is a large and varied one, and is effectively and tastefully displayed. Whether the articles are of Oriental or European design, their quality can be guaranteed.

Heligoland to Luxembourg in 1903 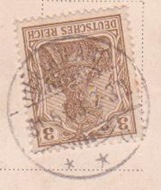 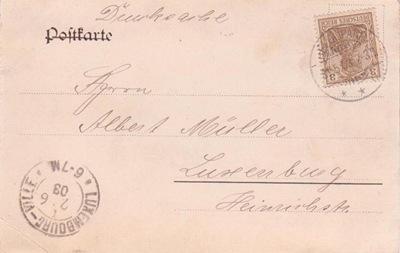 Great Britain returned Heligoland to Germany on August 10, 1890, as part of a treaty signed on July 1, 1890, settling territorial claims in Africa.

The tiny North Sea island's stamps were then superseded by those of the German Empire. The picture postcard shown here from 1903 is franked with a 3 pfg. Germania definitive, which pays the printed matter rate to Luxembourg. 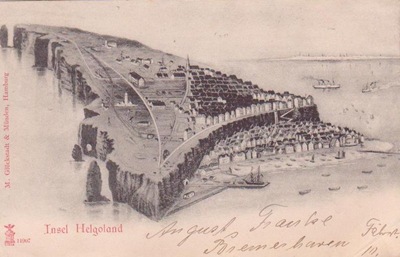 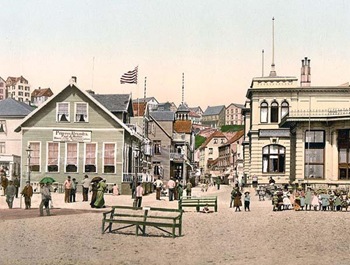 Kaiserstrasse, Heligoland at the turn of the 19th century 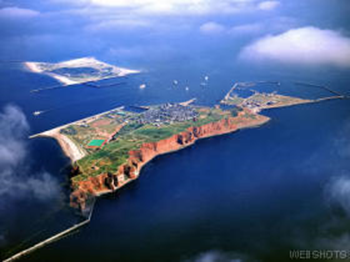 Posted by Arsdorf at 8:40 PM No comments: 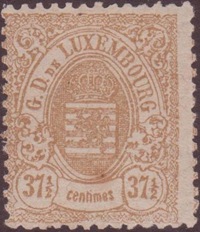 In 1879, the old 37 1/2c green definitive was reprinted in bistre brown (as seen above) solely for the purpose of being surcharged Un Franc.  This saved the expense of having one-franc clichés prepared, as there was no longer any postal need for the 37 1/2c denomination.  Some unsurcharged sheets of the 37 1/2c bistre brown found their way into the collectors' market.  As such, it is an unissued stamp, being neither a proof nor an error. 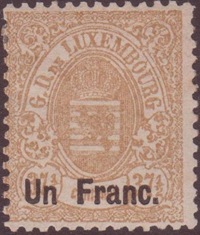 On the 37 1/2c stamp surcharged Un Franc is found the 'Un Pranc' error.  It is considered to be one of the great rarities of Luxembourg philately, cataloging 6500 Euros mint and 7500 Euros used in Prifix 2007.

The Un Franc surcharge is believed to have been set up in a form of 50 with 5 rows of 10.  The Un Pranc error occurs in positions 26 and 76 in the sheet of 100.  As a quantity of 104,200 was printed, 2084 Un Pranc errors once existed.  However, the Luxembourg postal authorities noticed the error very soon, after only a few sheets had been distributed.  They suspended sale of the surcharged stamps, recalled all of the sheets, and removed and destroyed the errors.  C S Holder FRPSL writing in Luxembourg Postal History:  An Introduction speculates that "perhaps less than 20 examples were actually used." 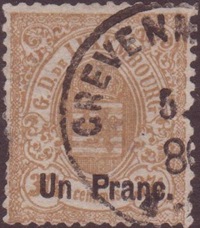 The forgery shown here came from an accumulation of classics that I was recently checking for forgeries.  I realized that it would have been very unlikely for an Un Pranc error -- released on or shortly after August 16, 1879 -- to have been used on mail canceled at Grevenmacher in 1880.  And upon closer examination, the stamp is not from position 26 or 76 of the 37 1/2c printing, conclusively disqualifying  the surcharge as authentic.

The characteristics of  positions 26 and 76 in the 100-stamp setting are described in René Muller's 2004 book Études sur les Timbres-Poste du Grand-Duché de Luxembourg.  An authentic Un Pranc error from the Luxembourg P&T Museum collection is shown in Robert Danzer's article, "The Story of the 'Un Pranc' Error of 1879" (Castellum, Vol. 3, No. 2 [September 1999]).  Danzer mistakenly refers to the two key positions as "27" and "77."

So then how did this damaged one-franc stamp postmarked at Grevenmacher come to have what is a very genuine-appearing 'Un Pranc' surcharge?  I believe  you will see answer below: 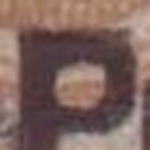 Notice how the top arm of the 'P' has a sharp point on the right hand side.  The 'F' of 'Franc' on a genuine surcharge appears to have been changed into a 'P'.

Beware of such philatelic pranks!

Posted by Arsdorf at 6:16 PM No comments: 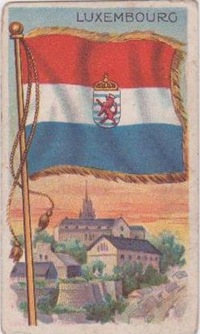 Flags of All Nations Series 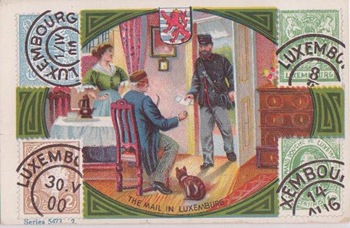 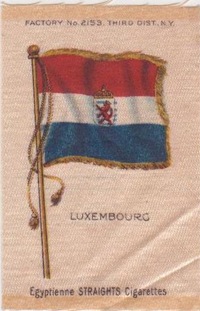 From about 1912 to 1915, silk (or satin) flags were inserted in cigar and cigarette packs.  They were supposedly aimed at women smokers who used the flags to make bedspreads, quilts, wall hangings, table covers, and even robes and other clothing.

Posted by Arsdorf at 7:30 PM No comments: