Gruss aus cards remain popular with deltiologists, although for some of us they tend to be a tad boring, much like modern-day telephone cards.  But this one caught my eye for its humor in a conservative era!

The German text instructs:  “Don’t go near the menagerie because the animals are shameless and nefarious!”

I imagine that there are many collectibles associated with the annual Luxemburger Schobermesse.

Mail to G.D. Charlotte’s Aide-de-Camp in Montreal during WWII

If you like large covers, you’ll enjoy this 267x192 mm. giant, not only for its size, but also for its 13-stamp franking and postal history significance.

After the Nazi invasion of Luxembourg on May 10, 1940, the royal family fled to France, later to Portugal, and then to England.  And in November 1940, Grand Duchess Charlotte and Premier Pierre Dupong formed a government-in-exile in Montreal, Canada.  Foreign Minister Joseph Bech and Labor & Social Welfare Minister Peter Krier represented the government in London.  Hugues la Gallais served as Luxembourg’s Minister to Washington.  This cover is probably from him.   The corner card reads:

On the back is the legation’s cachet:

Explaining an Overfranked Cover to Japan from the PTT in 1936

The Puzzle:  On first glance, this appears to be a souvenir cover sent by the PTT to Japan on December 19, 1936, with a four-color franking of the 1936 FIP Congress commemoratives.  But since the four stamps overpay the 3.50F UPU registered rate by 60c, why was a second 10c stamp affixed to the back of the cover, resulting in a total overpayment of 70c?  And why was the stamp on the back canceled one hour later than the stamps on the front and with a different device?  Strange stuff!

Mysteries like this confuse, confound, and annoy postal historians.  Was the cover overweight?  (No, an additional 20g would have cost one franc.) Was a return receipt requested but not indicated? (No, the receipt would have cost 1.75F.) 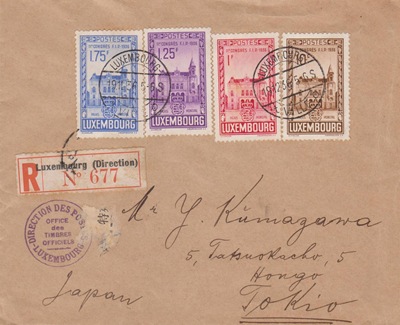 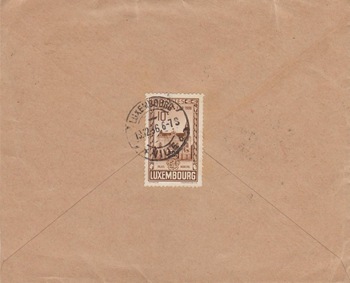 The solution:  The cover enclosure, happily still in the envelope, is a receipt for stamps purchased by the Japanese sender.  It explains the 4.20F (over)franking.

The sender paid for the stamps he ordered with 20 International Reply Coupons, each worth 1.75 LFr, for a total payment of 35 Luxembourg francs.  Thus, the following arithmetic:

The PTT rounded up the 3.50F UPU rate to 4.20F, thereby using up the remaining 70c of value of the 20 IRCs after taking into account the stamps purchased and the shipping charge.  Unlike modern philatelic agencies, the PTT preserved the souvenir value of a four-color cover by placing the second 10c denomination on the back, where it was apparently later noticed and cancelled en route to the cover being dispatched to Japan.

What’s so unusual about this 10c domestic postal card?

Posted by Arsdorf at 8:34 PM No comments:

Sometimes writers speak of a deafening silence or a mournful optimist.  As a postal historian, I consider non-uprated uses of the (otherwise common) 20c large-size (148 x 104 mm) Arms postal stationery card to be scarce.

This card appeared in January 1926 to pay the 20c domestic postal card rate and the 20c rate to Belgium.  However, that rate, which began January 1, 1926, ended shortly thereafter on July 31, 1926, just 212 days later.  Apparently very few of the cards used during that 212-day period were saved because I’ve only found two in over 50 years of searching.  Yet the card per se is not scarce.  You’ll find many uprated uses—at the 30c and 40c rates to France, Germany, and the Saar, and at the 90c UPU rate.  You’ll also find the card surcharged to 25c (Prifix No. 82).

Even searching through a stock of 3,500 cards from this period, I could not find a single use that was not uprated to pay a higher rate.  So I thought I would share with you my two uses of this card used at the 20c postal card rate: one to Belgium, and the other a domestic use, uprated but only to pay the registry and COD charges.  (The 70c registry fee is documented on the rate schedule shown on the 1926 facteurs’ official calender.)

If you have five or ten non-uprated uses of this card in your collection, let me know; then, I’ll modify this post!

Posted by Arsdorf at 7:42 PM No comments:

On December 1, 1929, Luxembourg increased the UPU postal card rate from 90c to 1 franc.  However, the one-franc single and double Arms postal cards did not appear until September 25, 1931.  The rate remained in effect until October 1, 1940.

These cards provide a fine opportunity for the postal stationery enthusiast to collect uses worldwide!  Here are some of my favorites:

Posted by Arsdorf at 2:15 PM No comments: