The Intellectuals Autographed by Albert Einstein 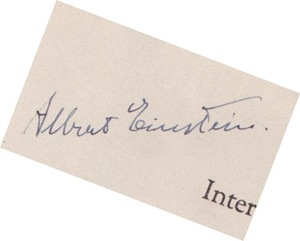 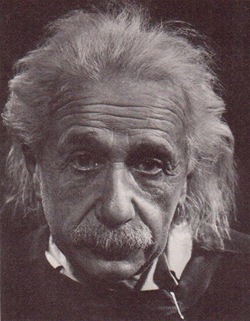 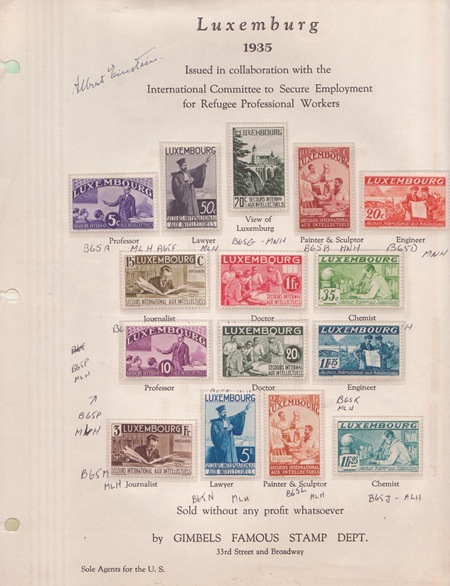 Back in the 1980s, the late eminent Luxembourg specialist and postal historian, Robert Danzer, used to drop by my office when he came from New York City to the San Francisco Bay Area to visit his son in Carmel.  He enjoyed regaling about obscure aspects of Luxembourgian philately while sipping a premier California cabernet sauvignon at lunch (usually at my expense).   On one of these occasions, he mentioned that he had heard that Albert Einstein had autographed album pages on which the Intellectuals series had been mounted.  He was quite excited about his efforts to locate such an album page, although as far as I know he never succeeded.  But this link between the Intellectuals series, which was primarily issued to raise funds to assist Jewish professionals fleeing Germany, and Albert Einstein stuck in my memory.  Someday, somewhere I thought, maybe I'll find what had eluded my devoted philatelic friend, Bob Danzer.

So you can imagine my joy in 2008 when, while surfing eBay, I noticed a Gimbels Stamp Dept. album page on which a mint set of the Intellectuals was mounted with ... yes ... Einstein's autograph in the upper left, just as Bob Danzer had described it!  My only disappointment was that the album page had been defaced by someone noting the Scott catalog numbers of the stamps in ballpoint pen, apparently oblivious to the authentic Einstein autograph on the page.  Wonder of wonders!

The text at the top and bottom of the album page corresponds to Gimbels' reference in a 1935 news release captioned 'Regarding the Luxemburg Stamps to Aid the Refugee Intellectuals,' which states that:

[t]he Government of Luxemburg in collaboration with the International Committee to secure Employment for Refugee Professional Workers, has issued on May 1, 1935, a special series of stamps that is selling officially at double their face value.  The nominal value, of course, goes to the Luxemburg Government.  The excess value goes to the International Committee, to aid its efforts to help the Refugee Professionals.  The Committee is now helping thousands of these men and women, in all parts of the world regardless of their nationality, creed or political faith.  Doctors, lawyers, teachers, journalists, chemists, engineers, artists -- professionals pictured "in action" on this unique series of stamps.  Luxemburg, through the Committee, has appointed GIMBELS sole agent for these stamps in the United States.

Gimbels Famous Stamp Section, the largest of any American department store, appreciates the honor of this appointment.  As in the case of a similar appointment to handle the Byrd Antarctic Stamps and Covers, we will show our appreciation by co-operating wholeheartedly and BY SELLING THESE STAMPS AT COST, without any profit whatsoever, at Gimbels Stamp Dept., 33rd St. & B'way, N.Y.C.

[The news release then lists 14 prominent members of the Committee.]

And in an autograph auction on the web, I noticed a small envelope (shown below) bearing the 5c and 50c Intellectuals signed in the lower right "Allo Achtung! Albert Einstein."  The auction description notes that 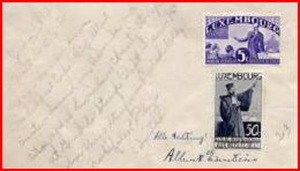 Indeed, Einstein's biographer, Walter Isaacson, writes at p. 437 of Einstein: His Life and Universe that:

Now that [Einstein and his wife] had decided to stay in the United States, it made sense for Einstein to seek citizenship.  When Einstein visited the White House, President Roosevelt had suggested that he should accept the offer of some congressmen to have a special bill passed on his behalf, but Einstein instead decided to go through the normal procedures.  That meant leaving the country, so that he -- and Elsa, Margot, and Helen Dukas -- could come in not as visitors but as people seeking citizenship.  So in May 1935 they all sailed on the Queen Mary to Bermuda for a few days to satisfy these formalities.

Luxembourg issued the Intellectuals series on May 1, 1935.  And to Gimbels' credit, they persuaded Albert Einstein to  autograph their promotional album page featuring the stamps upon his return from Bermuda that month.

Fortunately this example of Gimbels' album page with Einstein's autograph has been preserved, confirming Bob Danzer's belief back in the 1980s that such existed somewhere.

Bob, I'd be glad to buy another bottle of that expensive cabernet you liked if only you could be here to enjoy it and this postal history treasure with me!

Seemingly ugly covers sometimes sit around for years waiting for attention. This legal size commercial cover with its vertical creases and staple holes is a good example.  It had spent 15 or 20 years in a box of covers that I've never really liked, well ... it had been a cover I never really liked until I took a closer look at it tonight.  You'll see that this cover actually is a fine example of redirected cross-border mail incoming to Luxembourg.

It was originally posted on March 5, 1958, within Washington, D.C., at the 3c United States domestic letter rate as shown by the red Pitney Bowes meter mark.  Then it was redirected the next day to the "Amer[ican] Embassy / Luxembourg, G.D." as seen by the pencil notation on the front and the March 6th  Washington, D.C. machine cancel on the back.

The New York Exchange Office taxed the letter 15 gold centimes (equal to US 5c).  Why?  Because the surface rate to Europe at the time was 8c per oz.  Only the 5c difference between the foreign surface rate and domestic letter rate was charged in accordance with the UPU rule for redirected mail at the time, which I explained in my December 13, 2008 blog entry:

If the first dispatch had been fully prepaid and the charge for the further dispatch had not been paid prior to the redirecting, then the difference between the amount of postage already paid and that which would have been required if the article had been originally dispatched to the new destination was charged to the addressee.

There was no penalty for cross-border forwarding.  Thus, the 15 gold centimes tax was converted to 2.50 F in Luxembourg, with the postage due paid with 2.50 F of Luxembourg postage due stamps cancelled Luxembourg-Ville, March 18, 1958.

It's time to relocate this cover to my redirected mail album.  It's not that ugly after all! 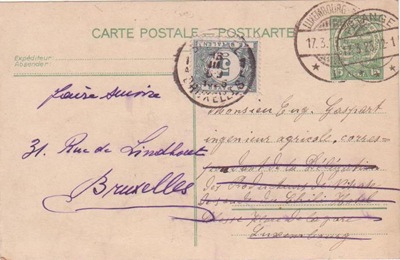 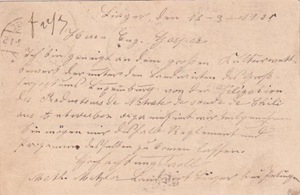 Posted by Arsdorf at 8:15 PM No comments:

An essay for the 1946 Dudelange souvenir sheet 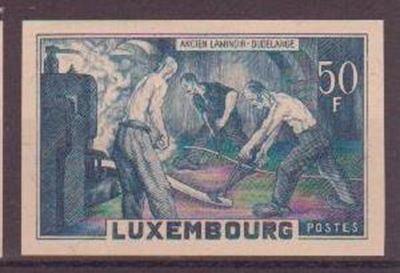 For the national stamp show held at Dudelange, July 28-29, 1946, Luxembourg issued a beautiful  semi-postal souvenir sheet featuring a 50-franc engraved stamp designed by August Trémont.  The stamp depicts the old forge at the Dudelange iron works in the iron mining region of southern Luxembourg.  The sheet was sold for 55 francs, with the supplement defraying the show expenses.  A quantity of 74,729 sheets was issued.  They were valid as postage until
January 1, 1947.

The unlisted imperforate essay above is gummed and identical in size and design to the issued stamp except for these differences: 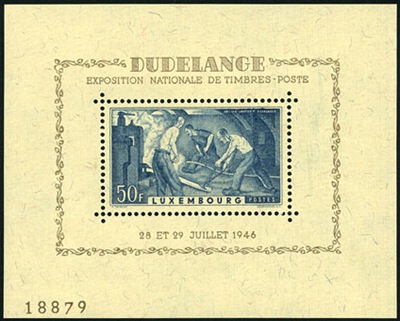 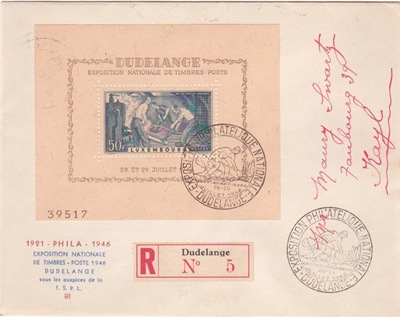 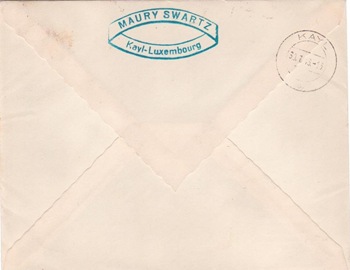 Who can tell me more about the origins of this recently discovered essay?  The essay appears in a beautiful one-frame exhibit devoted to the 1946 Dudelange Stamp Show.  It is online at the fine website of the Cercle Phila Dudelange:  http://www.phila-dudelange.lu/

Posted by Arsdorf at 9:28 PM No comments: 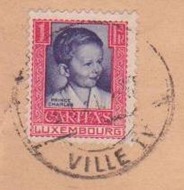 Each of the ten Caritas semi-postal sets issued between 1930 and 1939 contained a one-franc denomination.  What common rates did this denomination serve?  From December 1, 1929 to October 1, 1940, only two:

Although philatelic uses of these Caritas semi-postal issues abound, finding a cover or card with any of the 1-franc denominations  used to pay either of these two postal rates is very challenging.  Here is the only example in my extensive Luxembourg semi-postal collection! 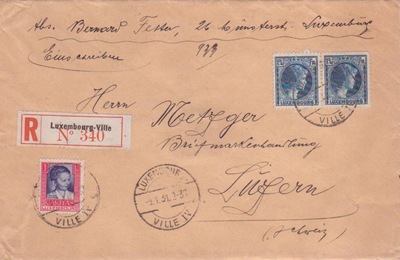 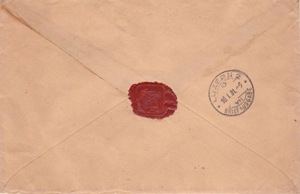 Posted by Arsdorf at 6:29 PM No comments: