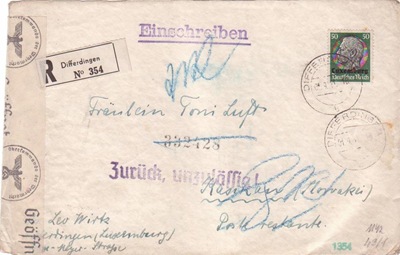 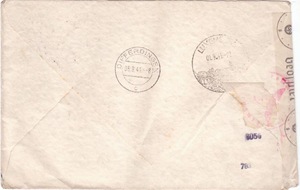 At page 63 of the Basien-Hoffkamp rate book, we see several obscure special Luxembourg postal rates that were in effect during the 1940 to 1944 World War II occupation.  And thanks to the work of Dieter and Fernand, we know that these include a 20-Rpf., 20-g letter rate to Hungary and Slovakia.  But when I was last in Luxembourg, one of the local collectors remarked:  "We never see uses of any of those rates."  Well, wow!  Here's one.  It documents the 20-Rpf. letter rate to Slovakia.

Are there any Luxembourg post-World War II first day covers to really love? 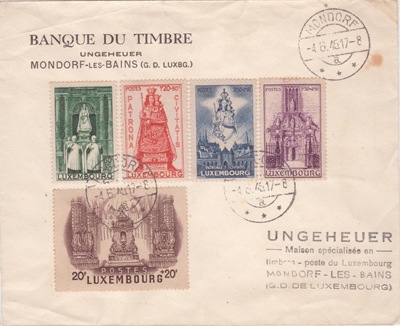 All of them, along with others acquired in general postal history collections I’ve bought, repose in a filing box. I seldom open the box as they seem to have little postal history significance. They are really just philatelic souvenirs, much like the medals and certificates we receive as exhibitors at stamp shows — nice to receive, and pleasant to look at once or twice, after which they are put away and forgotten.

So I shocked my philatelic friends recently when I purchased the 1945 Octave semi-postal issue first day cover shown above. And by (some) first day cover standards, it is nothing special. The overall condition is only average, there is no cachet or special cancel, and it was addressed with a rubber stamp. Why would a Luxembourg postal historian care enough to acquire it at considerable expense?

Well, the answer is quite simple — rarity. In over 50 years of scrutinizing the Luxembourg cover market, this is the first time I’ve seen this elusive first day cover offered for sale. The semi-postal stamps themselves are seldom seen used on covers of any sort. They catalog $165.20 as used singles, off cover, in Scott 2008. Moreover, most often used examples have been cancelled to order in Luxembourg-Ville. But here we have the set used on the first day of issue — June 4, 1945 — from a small spa town on the French border, postmarked with the uncommon Mondorf-les-Bains [a] Type 52 Belgian- style cancel. It is also the first day of use for this cancel, which the FSPL handbook lists as having been used only from June 4, 1945 to April 17, 1947.

I can only surmise that at the time, the Ungeheuers, who were still operating their stamp store from Mondorf, prepared only a small number of first day covers for this issue. Surely they must have thought that in the immediate aftermath of World War II, very few collectors would be able to afford this high face value set of stamps. After all, the country was just starting to recover from over four years of harsh German occupation and the recent devastation wrought by the Battle of the Bulge. Moreover, in 1945 first day covers were just beginning to attain the popularity that they would enjoy from the 1950s onward.

Certainly there is enough history associated with this first day cover to love it a lot! And for those who cannot find it in their philatelic heart to love any first day cover, the € 475 valuation in the current Prifix catalog should provide some consolation. Indeed, in my opinion this is the scarcest post-World War II Luxembourg first day cover. I love it -- a lot!

Posted by Arsdorf at 7:58 PM No comments: