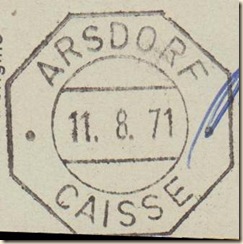 I occasionally find octagonal caisse cancels, such as this one from Arsdorf dated August 11, 1971, on documents – in this instance, on a deposit receipt. 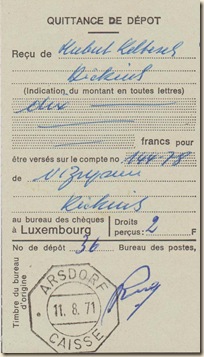 I would be interested in learning more about the uses of the caisse cancels.  In particular, why were they used instead of the office’s regular postal cancel for documents such as the one shown here?  Could a postal cancel have been used instead?  Were these cancels ever used to cancel stamps?  When were the first introduced?  Were they issued to all post offices? 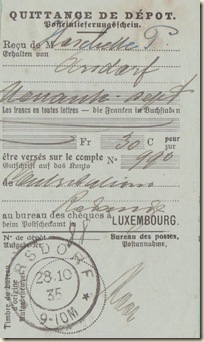 On this deposit receipt above, the Arsdorf double-circle postal cancel dated October 28, 1935, is seen. 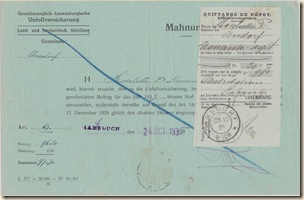 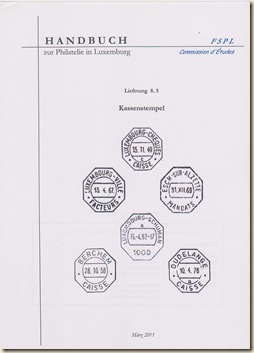 These cancels and their cousins are no longer a mystery!  The FSPL’s Commission d’Études in March 2011 published a comprehensive study and listing of these cancels as chapter 8 of the Handbuch zur Philatelie in Luxemburg.

The Handbuch illustrates the various types of octagonal kassenstempel, as shown below. 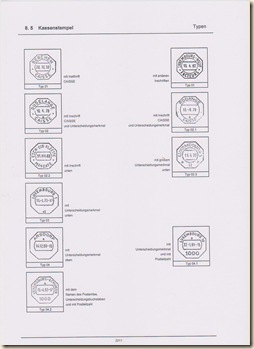 Thanks to the dedicated work of the FSPL, I now better understand and appreciate my Arsdorf caisse cancel! It was one of those philatelic mysteries that I thought might never be solved.

This letter, which was sent from San Francisco, California, January 6, 1915, to Schieren, shows two censor marks:  one from the  Czechoslovak Moravian town of Brünn [Brno],  as well as the usual German censorship mark applied in Trier. 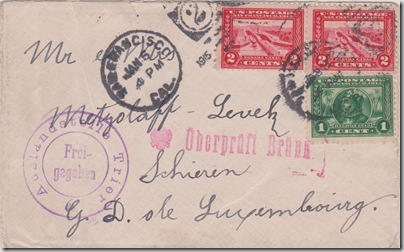 Perhaps a postal clerk distracted by the nice franking – the 1c and a pair of the 2c Pan-Pacific Exposition commemoratives paying the 5c UPU 20g letter rate – deposited the letter into the wrong mail sack!  There are no marks on the back to provide clues. 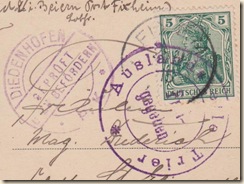 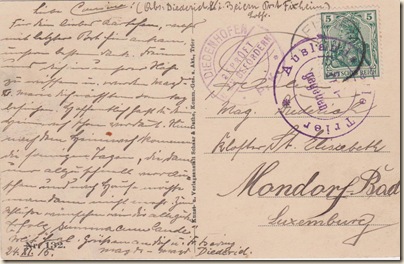 Picture postcard incoming to Mondorf-les-Bains from Fixheim in the then-German Lorraine.  The card is dated November 24, 1915, and was censored at Diedenhofen [today:  Thionville] in the Lorraine and Trier, Germany.

Censoring Luxembourg’s mail during World War I must have provided full employment for many German functionaries. The same probably could be said today for Rupert Murdock’s functionaries, who recently were found to have snooped through many 21st century electronic communications, but without the excuse of an ongoing war to justify the intrusions. 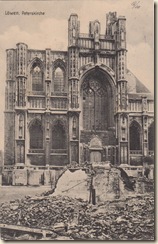 Posted by Arsdorf at 4:07 PM No comments: 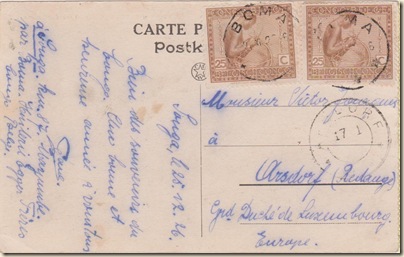 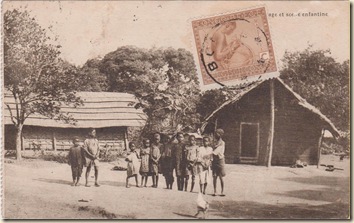 Being connected ancestrally to the small Ardennes village of Arsdorf, the birthplace of my maternal grandfather, I enjoy collecting the village’s postal history.

International incoming mail to Arsdorf is understandably elusive, so the postcard seen here from Boma in the Belgian Congo was a delightful recent discovery!  The card is dated 25 December 1926 at Souga and was posted from Boma.  The Arsdorf receiving cancel is dated 17 January 1927.  The card shows a real photo of children in Souga.  It’s franked with three singles of the 1923 25c basket weaving pictorial.

Posted by Arsdorf at 6:30 PM No comments: 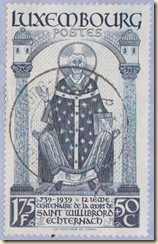 Having grown up in a small Minnesota village where Luxembourg pioneers in the 1880s dedicated the local Roman Catholic church to
St. Willibrord, I enjoy collecting covers with a ‘Willibrord’ connection.  Here is my favorite: 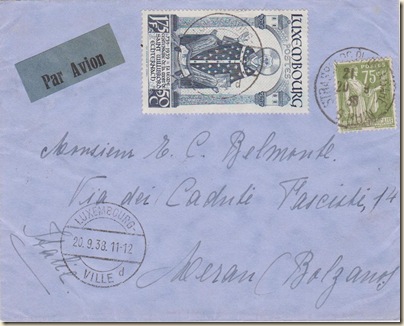 Until May 1, 1939, Luxembourg franking paid the applicable UPU or treaty rate on outgoing international airmail, with the airmail charge paid with stamps of the neighboring country from which the airmail service began — France, Germany, or Belgium.

Here the visually striking 1.75 F Luxembourg semi-postal commemorative issued for the 12th centenary of St. Willibrord’s death pays the UPU rate for a 20g letter to Italy.  A 75c French definitive pays the additional charge for airmail service from Strasbourg. The foreign stamp was stocked and sold at the Luxembourg post office and applied when the letter was mailed in Luxembourg, but the regulations provided that it was to be cancelled upon arrival at the foreign (in this instance, French) airport of dispatch.

On 20 September 1938, this cover was routed to Strasbourg’s airport postal facility and then apparently flown from Strasbourg to Bâle [Basel], Switzerland. It then traveled on the Luxembourg A Bâle and Chiasso [Switzerland] to Milan [Italy] TPOs the next day, reaching its destination of Merano in the southern Tyrol region of Italy early on the morning of 22 Sep 1938. 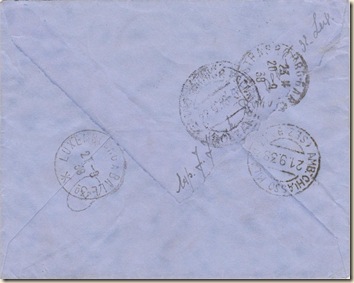 Here is my explication of the cancels:

Semi-postals were seldom used on these airmail covers with two-country frankings.  This cover is a remarkable exception.

Grand Duchess Marie-Adélaïde died an untimely death on
January 24, 1924.  As a memorial, Luxembourg overprinted the 12½c, 35c, 2½ F, and 5 F Marie-Adélaïde definitives with the word CARITAS, adding surcharges of 7½c, 10c, 1 F, and 2 F, respectively.  The surcharge proceeds were donated to the Luxembourg Red Cross.

Although 104,745 sets of these semi-postals were issued on April 17, 1924 (valid to July 1, 1928), we seldom see them used on properly rated covers, and almost never on non-philatelic covers.  This is perhaps explained by the absence of contemporary rates that required these denominations!

Thus, my recent acquisition of the cover seen below was very special.  Here a pair of the 12½c+7½c denomination exactly pays the 25c 20g domestic letter rate for a letter from Remich to Belvaux posted on March 19, 1925. 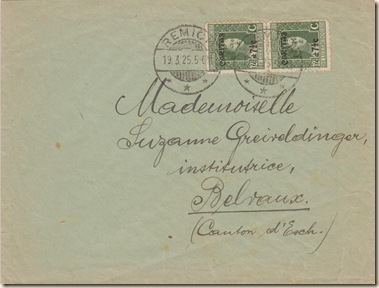 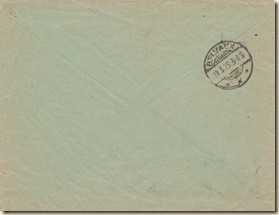 Has anyone seen a commercial use of the 2½F+1F or the 5F+ 2F?  Sometimes I like to dream about what such a cover would look like.  The 5F+2F registered sole use shown below from the Administration des Postes et des Télégraphes to Paris, France, April 19, 1924 (two days after issuance) is obviously overfranked. 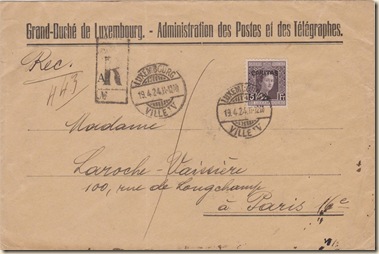 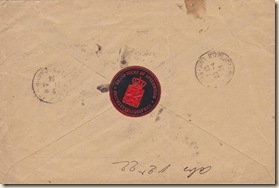 And this correctly rated registered cover from Wilwerwiltz to Monaco bearing a block of the 35c+10c was posted January 11, 1929, after the Caritas stamps had been demonitized more than seven months earlier! 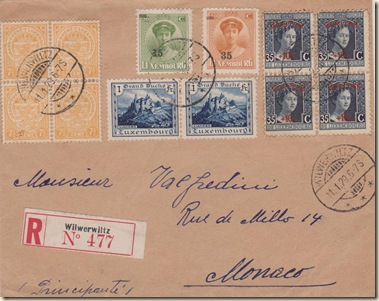 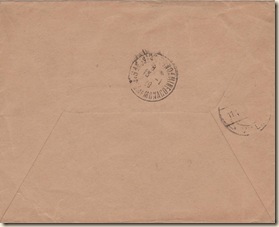 Posted by Arsdorf at 7:49 PM No comments: