Kind readers of this blog have pointed out that on or about April 1, 1935, the Belgian franc was devalued 28% with respect to the Luxembourg franc, with one Luxembourg franc now worth ~1.25 of the devalued Belgian francs. It was at this time that Luxembourg and Belgian departed from the gold standard.  This exchange differential remained in effect until the World War II German occupation in 1940.

For example, if the pre-1935 Belgian airmail supplement was one Belgian franc, in 1935 it necessarily increased to ~1.25 Belgian francs to take into account the devaluation of the Belgian franc vis-a-vis the Luxembourg franc.  But keep in mind that the Belgian stamps were only available at the main post office in Luxembourg-Ville, and that apparently the lowest denomination available for mixed-franking of airmail was the Belgian 50-centime stamp.

At page 165, the Basien-Hoffkamp rate book provides conversions of the Luxembourg franc vis-a-vis the Belgian franc, German mark, and French franc, citing Luxembourg Post-Instruction No. 1046/19 and No. 1074/20.

In the chart below, I’ve simplified the arithmetic:

Here are a few examples: 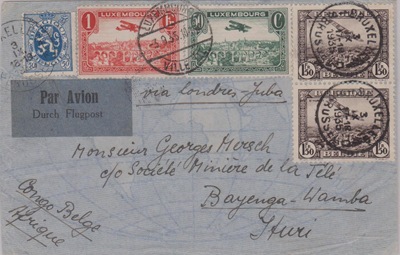 III. Airmail within Europe after the 1935 Devaluation
At page 171 (Luftposttarife 2-1), Basien-Hoffkamp lists the 20g airmail supplement as 50c for Belgium, Germany, France, Great Britain, the Netherlands, and Switzerland, and 1.50 F for other European countries.
Here more research and a census would be helpful.  Was the 50c tariff rounded up to 1.00 F?  Was the 1.50 F tariff rounded up to 2.00 F? Some of my covers to the 50c-tariff countries have 50c franking; others, however, have 1.00 F franking.  And I also have covers with 50c franking to European countries other than those that Basien and Hoffkamp list.


IV.  Is additional information available from the UPU Library?
Robert E. Picirilli, writing in his 226-page study entitled Postal and Airmail Rates in France & Colonies 1920-1945 [France and Colonies Philiatelic Society, 2011], states that the Universal Postal Union periodically published a Liste générale des services aéropostaux (referred to as the “AV1 Liste”), which for Picirilli proved “to be a valuable source of information, often confirming and sometimes adding to what [he] found in the official journals.”  And he says that the UPU librarian, Solange Avila, was of great assistance in tracking down the UPU records of French airmail rates.
We might consider doing the same in the hope of further expanding our knowledge of the pre-WWII airmail rates.
V.  Keep your comments coming!
I’m grateful to my European collector-colleagues for their incisive comments and interest in this blog.

Posted by Arsdorf at 1:23 PM No comments:

The second of two five-centime green Second Allegory issue postal cards appeared on September 12, 1887.  It featured the caption “CARTE POSTALE/Postkarte” with a straight bar in the letter A of CARTE and letter A of POSTALE.  Enschedé’s last delivery, which consisted of 28,000 cards, occurred on
February 29, 1888.  Like Enschedé’s six prior deliveries, the card’s first address line was preceded by a sans serif ‘A.’

The Third Allegory issue appeared in July 1888 with “CARTE POSTALE.—POSTKARTE” replacing “CARTE POSTALE./Postkarte.” Curiously, the first delivery, comprising only 41,000 cards, also precedes the first address line with a sans serif ‘A.’  However, the subsequent 38 deliveries between August 14, 188 and December 24, 1894, comprising 2,647,990 cards, precede the first address line with a serifed ‘A.’  What prompted the design change?  What’s the earliest known use of the sans serif ‘A’?

I.  Frugal use of out-of-period stamps and stationery

The 5c gray Allegory card appeared on December 1, 1882, along with the Allegory definitives.  Enschedé supplied the sixth and last printing on October 27, 1884.  Thereafter, on April 1, 1885, the first printing of the 5c green Allegory card was placed on sale.

Sometimes, however, an effort to be frugal fails, as in the example below:

Here the sender has attempted to uprate this 5c gray Allegory card to pay the ten-centime postal card rate to Belgium using a 5c gray cutout!  The card was posted at Redange, May 10, 1885, transited Luxembourg-Gare, reaching Farciennes, Belgium, on May 11, 1885.

The attempted uprating apparently did not sit well with the postal clerk in Luxembourg-Gare who cancelled the cutout (since the Redange clerk had not) and probably struck the ‘T’ indicating taxation of the card ending the sender’s effort to be frugal!

Posted by Arsdorf at 6:59 PM No comments: 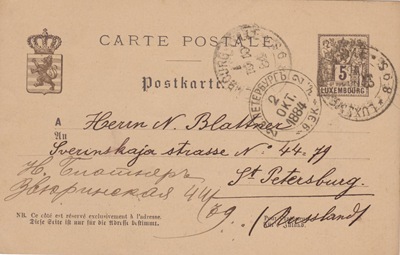 This five-centime gray 1st Allegory issue postal card, used at the UPU printed matter rate to St. Petersburg, Russia, appears to have been postmarked at Luxembourg-Ville, 10 Oct 1884, and received eight days earlier, on 2 Oct 1884 in St. Petersburg.  Absent error, how would this be possible?

In Russia, the Gregorian calendar was not accepted until shortly after the October Revolution (so named because it took place in October 1917 in the Julian calendar). On 24 January 1918, the Council of People's Commissars decreed that Wednesday, 31 January 1918, was to be followed by Thursday, 14 February 1918, thus dropping 13 days from the calendar. Therefore, the 2 Oct 1884 postmark date on this card must be converted from Julian to Gregorian calendar days.

The following helpful conversion information can be found at the Wikipedia entry for the “Gregorian calendar.”

Using this information, we see that the Julian calendar arrival date of 2 Oct 1884 converts to 14 Oct 1884 on the Gregorian calendar, which is consistent with the timeframe we would expect for delivery of printed matter from Luxembourg to Russia in 1884.

Oh, and the printed back of the card provides a special treat.  It contains Alph. Brück’s “spottbillig” [read in English: very cheap] wholesale prices for Luxembourg stamps and postal cards as of
9 Oct 1884! 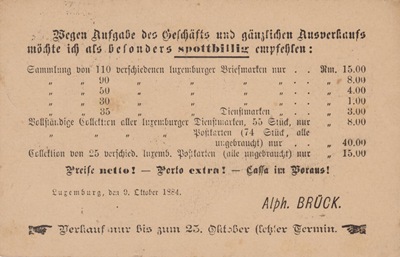 I’d like to place an order today, but I notice that the special prices ended on 25 October 1884!

Posted by Arsdorf at 5:26 PM No comments: 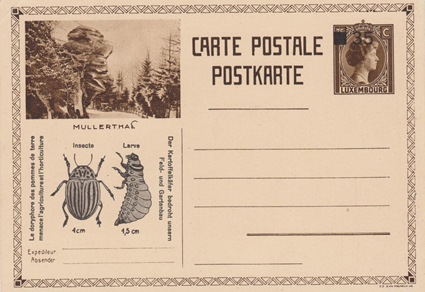 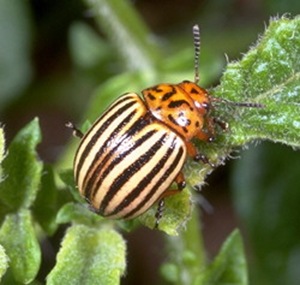 In the 1930s, the black and yellow-striped "potato bug" presented a serious danger for the potato farmers of the Luxembourg Ardennes, as my Luxembourgish grandfather once attested.   Both the striped beetle and their black-spotted red larva feed on potato leaves. The resulting damage can greatly reduce yield and even kill the plants.

So dangerous are these pests that in 1936 Luxembourg  surcharged the set of six 75c Charlotte postal viewcards to the 35c rate for domestic postal cards and cards to Belgium, and overprinted the cards with the drawings of the potato bug and potato bug larvae seen below along with stern warnings in French and German of the dangers the bugs posed to “l’agriculture et l’horticulture.” 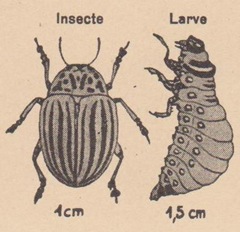 Indeed, close scrutiny of potato bug anatomy (shown below) reveals them to be a predator well equipped to do severe damage to the plants they infest.  One website, www.potatobug.com, describes them as “[t]he most universally feared, hated and disgusting creatures on the planet.” 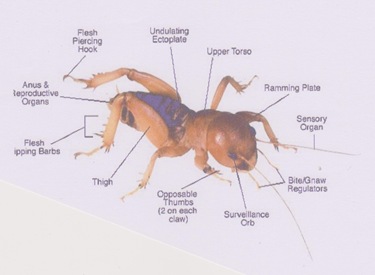 Press reports in September 1940 charged that British airmen were dropping bags of potato bugs on potato fields in Germany, Luxembourg and Belgium in an effort to lay waste to a major food source in those countries.  One report documents the finding of brown bags filled with potato bugs that had been dropped “north of a Luxembourg town” on September 8, 1940.

So, with the understanding that the potato bugs are more than a garden nuisance, we can better appreciate that these 1936 “potato bug” postal cards not only performed normal postal functions but also provided a medium with which to alert the public to the very real dangers presented by this agricultural pest.

Here are some “potato bug” cards: 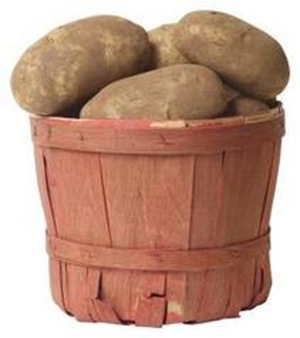