Failed Frugality — A taxed letter from Boulaide in 1921

James Newcomer writes that “[i]n the modern world of 1919-1920 political Luxembourg came of age.”[1] Amidst the economic uncertainty of the postwar years, the Grand Duchy’s economic orientation toward Germany ended. The country’s economic union with Belgium – the L’union économique belgo-luxembourgeoise (U.E.B.L.) — was negotiated in 1921, taking effect the next year. And about this time, the 15c domestic letter rate was increased to 25c, effective April 1, 1921.  Perhaps this context helps explain the cover shown here.

The Grand Duke Adolphe definitives were demonetized on
January 1, 1909. But here a frugal Luxembourger from Boulaide uses the 5c and 10c denominations in combination with the then- current 10c Marie Adélaïde definitive to pay the new 25c domestic 20g letter rate. The letter was posted July 21, 1921, to Buchholtz (post: Grevenmacher).

Ah, but the attempt to save 15 centimes by using the long-invalidated stamps failed. A postal clerk has marked off the Adolphe definitives, showing with a ‘0’ that they no longer have any postal value. At Grevenmacher the next day a strip of three 10c postage due stamps is used to pay the 15c deficiency, doubled of course to impose a fiscal penalty on the unlucky recipient.

Posted by Arsdorf at 4:22 AM No comments: 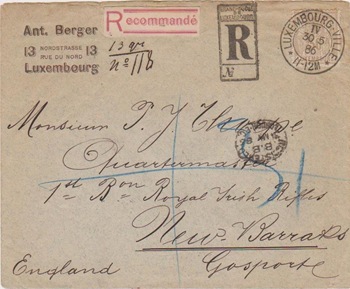 Ant. Berger's privately printed registry label in red anticipates those that Luxembourg used in the 1930s.  Here we see it used on  a registered cover from Luxembourg-Ville, May 30, 1886, to the Royal Irish Rifles Quartermaster at New Barracks, Gosport, England.

Ant. Berger was, I think, a dealer or collector.  I can't recall having seen the privately printed registry label before.  This cover turned up at the FIP Show in Lisbon last year.  It's a compelling registered cover in all aspects.  It would have been a shame to leave it in the dealer's stock! 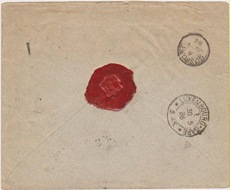 Posted by Arsdorf at 8:28 PM No comments: