1919 Money Letter to Germany – Why was it inadmissible? 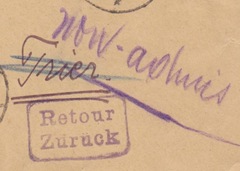 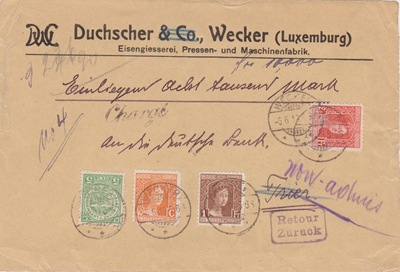 The postal history of Luxembourg during and shortly after World
War I is still poorly understood by many collectors, largely because it has been inadequately documented.  It could easily be the subject of an award-winning tome.  Here is an illustrative example.

This is a front from a 10,000-franc money letter posted from Wecker to Germany in June of 1919.  It was returned with a rectangular ‘Retour/Zurück’ handstamp and ‘non-admis’ in purple manscript.  Why?

Duchscher & Company in Wecker has provided us with many well-franked commercial covers.  Some of the early Duchscher air mail covers are truly spectacular.   But this 1919 money letter front needs further explanation before it can take an honored place in my WWI postal history collection.  Can you help?