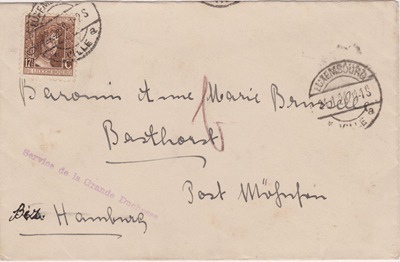 Grand Duchess Charlotte posted this cover on January 24, 1920, slightly more than a year after her reign began following Marie-Adélaïde’s abdication on January 14, 1919.   By then, her elder sister was in exile, having joined the Carmelite convent of the Little Sisters of the Poor in Modena, Italy.  Three months earlier, Charlotte had married Prince Felix of Bourbon-Parma.

The first series of definitive stamps featuring Grand Duchess Charlotte was not to appear until 1921, so in 1920 the Marie-Adélaïde definitives and officials were still commonly used, with the 17½c paying the concession 20g letter rate to Germany.  This rate remained in effect until December 1, 1920.  On that date, the German concession rate was increased to 25c, eliminating the need for a 17½c stamp.

Here the 17½c Marie-Adélaïde official pays the letter rate to Basthorst by Hamburg [post: Möhnsen].  The cover is addressed to Baroness Anne Marie Bruselle, who was Marie-Adélaïde’s lady-in-waiting, and who Edith O’Shaughnessy says she referred to as her “sixth sister.”  Endorsed in purple “Service de la Grande Duchesse” and bearing the indicia of the “Palais Grand Ducal Luxembourg” on the flap, the distinctive handwriting is that of Grand Duchess Charlotte.

It is a pity that covers like this appear on the auction market with no indication of their royal provenance. 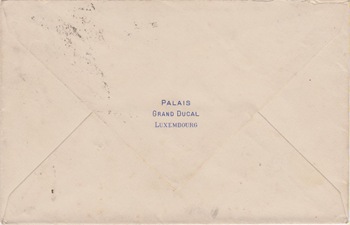 Posted by Arsdorf at 1:30 PM No comments: