In the small Minnesota village in which I grew up, the postal clerks often referred to Luxembourg as part of Germany.  And they were not alone in this misconception.  We occasionally find cards and covers addressed to “Luxemburg, Germany” from all parts of the world.  You could form a comical exhibit of such cards!

But here is the first example I’ve encountered in which the sender misconceives of Luxembourg as part of France—specifically, “Esch-sur-Alzette, Luxemburg, France.”   Esch, of course, is located just a few kilometers north of the French border. 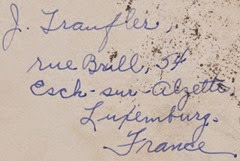 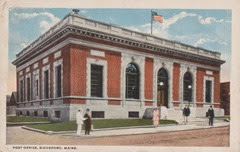 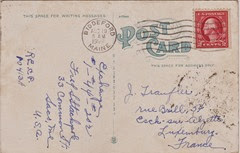 So keep an eye out for incoming mail.  Somewhere, I think I also have a card to Luxemburg, Belgium.

Posted by Arsdorf at 7:07 PM No comments: