50.-F Esch-sur-Alzette Communal Used on a Police Certificate in 1994 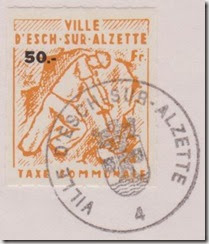 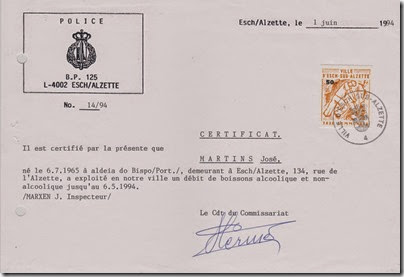 A Philatelic Marriage (but updated below!) 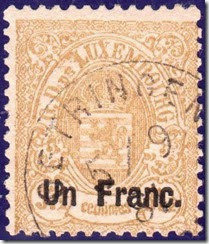 
The 1-franc surcharge on the Local Print 37½c Arms appeared in August 1879. Like its color-rouletted predecessor, the stamp served the need for a denomination higher than the existing 40-centime stamp, especially for use on money letters, which were now permitted under the 1872 post-Franco-Prussian War postal convention with the German Empire. For that reason, Bruck printed the old (now obsolete) 37½c denomination solely for the purpose of it being overprinted Un Franc, thus saving the expense of creating a new die and plate.

The stamp brings to the marriage better-than-usual perforations but evidences the typical Local Print poor centering and small margins. But these are minor deficiencies, which are more than compensated for by the desirable cancel—the single-circle Oetringen with readable date and all nine letters of the village name present. Even though this single-circle cancel continued to be used until 1920, we can safely say that it is scarce, especially on the 1-franc denominations, thus making the cancel a desirable “bride” for this otherwise rather drab looking bistre-shade stamp.

In this age of postal history, we should not forget that philately is the study of stamps, first and foremost. Share with me some of the philatelic marriages in your collections!

A correspondent in Luxembourg advises that a stamp dealer is reputed to have forged the Oetringen cancel to “upgrade” mint stamps that were of little value. And I notice that Lars Boettger advises that “Die gewöhnliche Stempelfarbe ab 1875 war blau, schwarze Abschläge mit markantem Stempelbruch unten im Kreis sind rückdatiert” (Fälschungen und Manipulationen Luxemburger Briefmarken, p. 50). Unfortunately the bottom of the cancel on this Un franc is not visible. I have the cancel in both blue and black on the 10-centime Armoiries, adding to the uncertainty. The stamp dealer probably had access to the actual canceler (but not to the blue ink pad!).

Maybe this “marriage” will/should end in a divorce!
Posted by Arsdorf at 1:26 PM No comments: 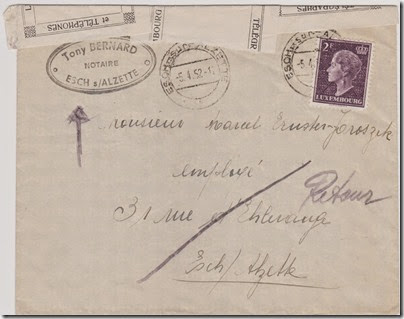 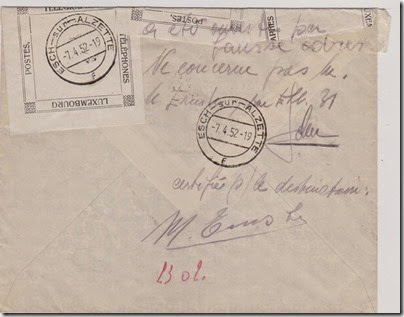 Esch-sur-Alzette, local letter posted 5 Apr 1952, officially resealed and returned to sender on 7 Apr 1952 with the postal clerk’s explanation in French on the back.

Use of Luxembourg’s official postal seals after World War 2 remains undocumented.  This recently discovered example shows that by 1952 seals were no longer transparent and that the centered text now reads LUXEMBOURG (at top), TÉLÉGRAPHES (at bottom), et TÉLÉPHONES (at right), and POSTES, (at left).  Moreover, there is a new corner ornament: 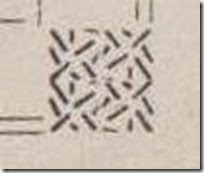