Collecting modern postal history can offer you a lot of philatelic pleasure without emptying your bank account.  My "modern" Luxembourg collection begins with the issues of the late 1950s.  It has no arbitrary ending date.

So-called "modern covers" are like young children.  They might not yet have found their place in the (postal history) world, but that will just take time.  Give them another fifty years to mature.  Collectors will look back over the immediate past 75 or 100 years, caterwauling about  the beauty of covers showing the rates, routes and markings of the latter half of the 21st century.  And some pundits will wonder why so many such covers were tossed in the bin by the 21st century postal historians.

Here are a few examples of delightful modern Caritas covers: 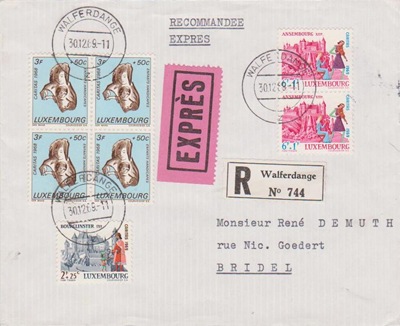 Covers with mixed-issue Caritas frankings are scarce.  The Caritas issues prior to 1986 were only valid to the end of the year following their issuance.  Thus there typically were only a few days when both issues could be used.

The Elegance of Sole Frankings
on Correctly-rated Covers 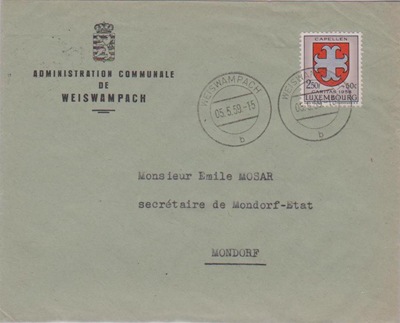 Sole frankings exude the elegance of a beautiful flower in full bloom.  Searching for correctly rated, sole-franked covers for each value of a set is a worthy task, not easily accomplished!

Postings to Exotic Destinations|
(such as Uganda) 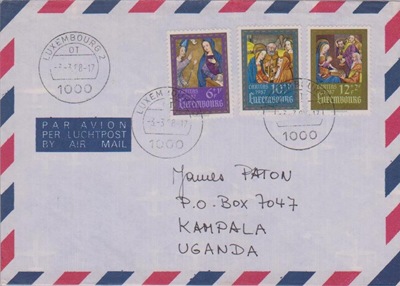 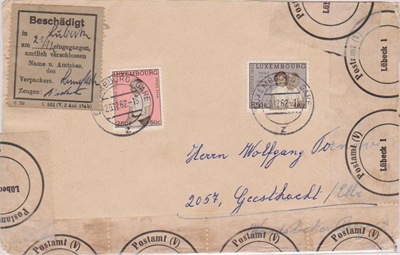 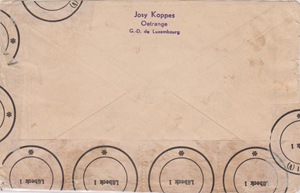 The auxiliary postal label applied at Lübeck indicates that the letter arrived damaged [Beschädigt] on December 21st.  It was repaired with eight official postal seals.

Posted by Arsdorf at 7:13 PM No comments: 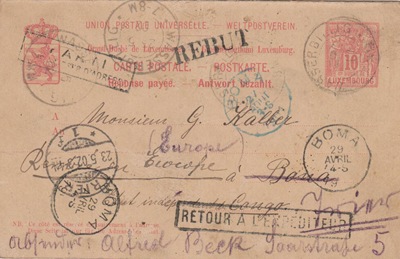 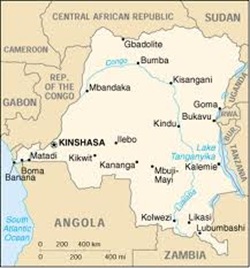 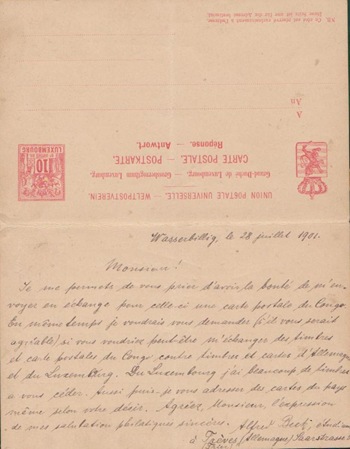 Posted by Arsdorf at 6:10 PM No comments:

Explaining two-country frankings — occasionally found on the Allegory postal cards, especially during the 1890s —  challenges even the most erudite postal historians.  Here are four on which to test your knowledge.

1.  Bettingen to Stuttgart in 1894, redirected to
Munich, Germany 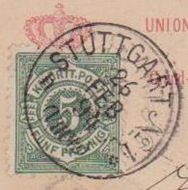 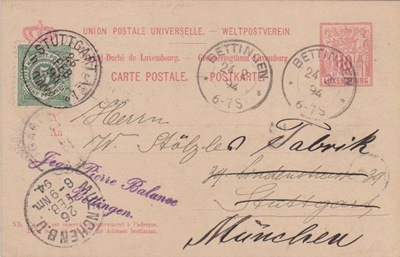 From the inception of the Treaty of Berne on July 1, 1875, no additional postage was to be charged for the redirection of postal articles within the interior of the union.  So why was a 5-pf Württemburg stamp added when this card was forwarded to Munich?  The 10-centime Allegory stamp imprint paid the UPU postal card rate.  Perhaps because of the change in the addressee's name, five centimes were added to pay what I assume was the rate within Germany (from Württemberg  to Bavaria)? 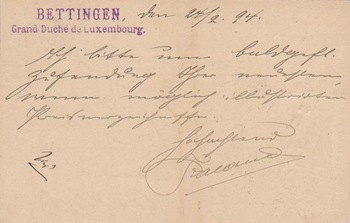 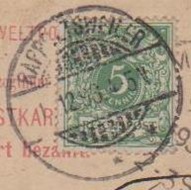 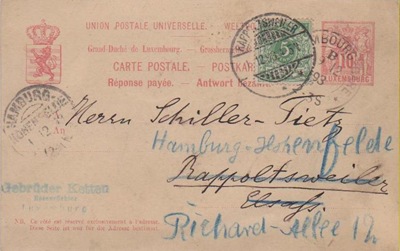 As in the first example, a 5-pf stamp has been added to this card sent by the well-known Luxembourg rose growers, Gebrüder Ketten, when it was forwarded from Rappoltsweiler in the German Alsace to Hamburg, Germany.   (Rappoltsweiler, located in the Haut-Rhin department of today's French Alsace, is now known as  Ribeauvillé.)

As the 10-centime Allegory imprint paid the UPU rate, was additional postage necessary to forward this card? 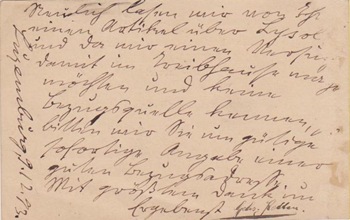 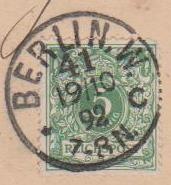 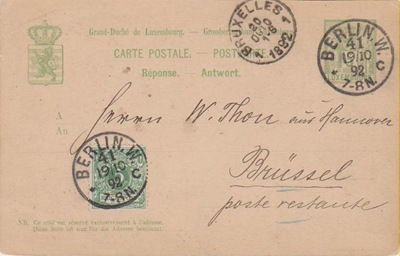 Here the reply half of a 5c + 5c domestic message-reply card was posted from Berlin, uprated to the 10c UPU rate with a 5-pf German definitive, and directed to Brussels, Belgium!  Remarkably, no tax was charged.  Reply cards were supposed to be franked only with postage of the country of origin, which was only valid to return the reply card to the country of origin.

Was this possibly a philatelic creation? 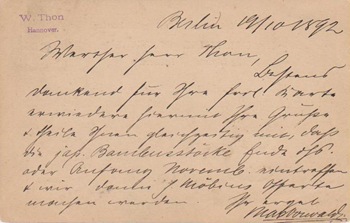 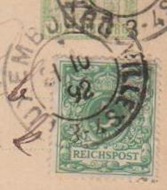 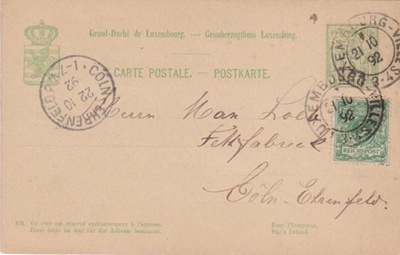 Here the uprating with a 5-pf German definitive to pay the UPU (and German treaty) rate is done in Luxembourg, but without the imposition of any tax, perhaps as a matter of convenience for the sender and acquiescence by the postal clerk. 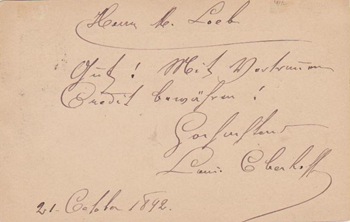 Posted by Arsdorf at 1:35 PM No comments: