There is irony in the franking—a stamp from the issue celebrating Luxembourg’s century of independence.

In more recent times, I suspect similar sentiments were expressed by those leaving Iraq, Afghanistan and Syria, as conflict beckoned, not to forget the Ukraine even today.

From A to Z

Collecting incoming mail adds color and richness to a Luxembourg postal history collection.  And with searchable websites and auction catalogs, it’s possible to find many unusual examples.  Here are a couple of my favorites—Aden and Zanzibar: 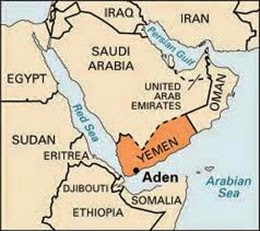 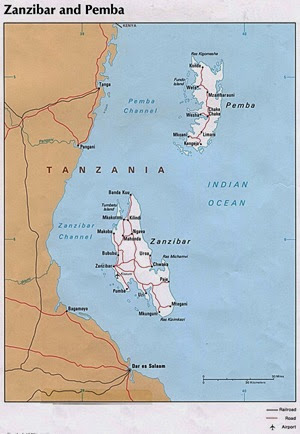 Posted by Arsdorf at 2:36 PM No comments:


During the World War II occupation, letters and postcards from Luxembourg to Belgium were treated preferentially, with the Reich domestic 12 Rpf. letter rate and 6 Rpf. postcard rate applying. (In contrast, mail to neighboring France was charged the 25 Rpf. foreign letter and 15 Rpf. postcard rate.)

In the 14th Schlegel auction in Berlin this week, there were over 300 lots of Luxembourg classics, but the starting price for the least expensive lot was about 50 euros (plus commission, plus a per lot fee, plus money transfer charges, plus shipping). On websites like Delcampe and Jim Forte’s www.postalhistory.com, however, you’ll find that equally interesting, equally challenging modern postal history abounds, and it is often offered for one-tenth of that 50-euro threshold over at auction houses like Schlegel.

Here’s an example of a recent purchase of mine of modern Luxembourg postal history from a seller in Portugal—price: just $2.99!

Scarce Luxembourg-franked mail carried on the DO-X Demonstration Flight in 1931! 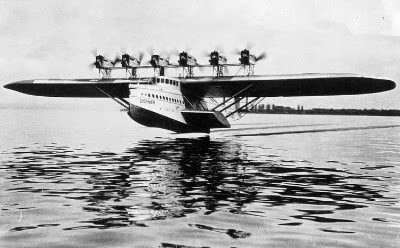 Completed in June 1929 and first flown on 23 July 1929, the 56-ton Dornier Do-X was then the world’s largest, heaviest, and most powerful flying boat.  Powered by 12 engines (six tractor propellers and six pushers), it was designed to carry 66 passengers in luxurious accommodations on long flights (like on an ocean liner) and 100 on short flights.  The engines consumed 400 gallons of gas each hour. 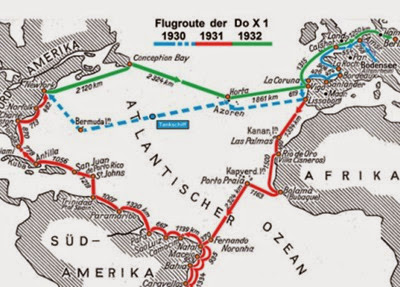 To introduce the airliner to the potential United States market the Do-X took off from Friedrichshafen, Germany, on 3 November 1930, for a transatlantic test flight to New York, just three years after Lindbergh's historic trans-Atlantic flight. The convoluted route (shown in red on the map) first took the Do-X to the Netherlands, England, France, Spain, and Portugal.

Treaty mail from certain European countries was accepted for dispatch via Friedrichshafen with stamps of the country of origin exclusively.  The American Air Mail Society (AAMS) catalogue lists these countries as Austria, Danzig, Liechtenstein, Netherlands, Saar and Switzerland, with the possibility of mail “dispatched from Luxembourg (with Luxembourg and Dutch stamps)” (5th ed., vol. 5, p. 2353).

At Lisbon, the journey was interrupted on 29 November, when a tarpaulin made contact with a hot exhaust pipe and started a fire that consumed most of the portside wing. The DO-X remained in Lisbon harbor for six weeks, until the end of January, while new parts were fabricated and the damage repaired by Dornier technicians. Additional mail was taken aboard at Lisbon.

The DO-X resumed its demonstration flight on 31 January 1931, and after 7 hours and an average speed of 190 km/h, the flying boat reached its first stop at Las Palmas in the Canary Islands.

But the aircraft was dogged by bad luck. On 3 February shortly before take-off, the Do X collided with a swell that came rolling in. The boat suffered a heavy blow, and the wings were almost torn off. The aircraft was stuck in Las Palmas for the next three months because of the necessary improvements to her structure.

The flight continued on from Las Palmas.  However, this card was returned from Las Palmas to Rotterdam, where it arrived on 31 March 1931, and from whence it was forwarded to The Hague, the addressee being G.A.G. Thoolen, whose cachet on the back reads “Air Post Specialist ‘s-Gravenhage – Holland.”

By 5 June 1931, the DO-X had reached the islands of Cape Verde, from which it crossed the ocean to Natal in Brazil, where the crew were greeted as heroes by the local German émigré communities. 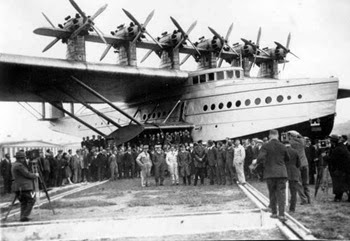 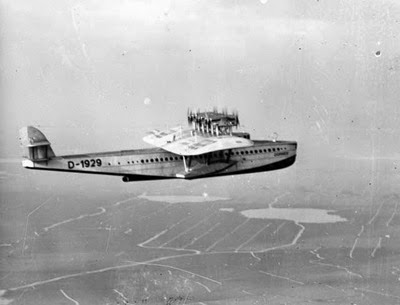 Quite a memorable era in aviation and aeropostal history!
Posted by Arsdorf at 12:54 PM No comments: