Scarce, Illegal and Legal Uses of the 1-Rpf. Hindenburg in Luxembourg During the World War II Occupation

Some of the most interesting covers are those from the World War II German occupation of the Grand Duchy. For the knowledgeable philatelist, they present abundant opportunities to find philatelic treasures ─ often at very reasonable prices ─ amidst dealers’ stocks at show bourses, on eBay or Delcampe, and in European auctions. Some of these treasures are showcased in this article.

was occupied on . The Grand Duchy’s stamps remained valid until .[1] They were replaced on that date by 16 denominations of ’s Hindenburg Médallion series overprinted ‘Luxemburg,’ with face values ranging from 3 Rpf. to 100 Rpf. Curiously, the lowest denomination of the Hindenburg series ─ the 1 Rpf. Hindenburg ─ was never overprinted. However, in response to local demands, an unknown quantity of the un-overprinted 1 Rpf. was made available to pay the 1-Rpf. newspaper wrapper (or zeitungssachen) rate for locally delivered newspapers. This rate remained in effect only from October 1 to the end of 1940, just 92 days.[2] According to M. C. Gilhousen writing in the German Postal Specialist, the 1 Rpf. Hindenburg:

was occasionally used for other purposes but was assessed postage due at the 150 percent rate when detected. In many cases, postage due charges were not assessed. Keep your eyes open for the 1 Pf used in between and . They are very rare.[3]

Gilhousen’s reference to , suggests that the 1-Rpf. Hindenburg might not have been available in until that date, in which case the period of sole use on newspaper wrappers would have been only 31 days. His reference to , is to the date on which use of all German stamps was permitted in . 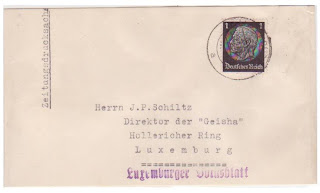 2(a) ─ Scarce newspaper wrapper use: While the covers Gilhousen refers to indeed are scarce, the wrapper shown in Illus. 1 is even scarcer. It shows the 1-Rpf. Hindenberg properly used as sole franking on a newspaper wrapper endorsed “Zeitungsdrucksache” and postmarked Luxemburg [a], , the last day of the 1 Rpf. zeitungssachen rate. The wrapper was used to send an issue of the Luxemburger Volksblatt newspaper to a local subscriber. Thus far, I believe the only other reported example of this is a similar wrapper in Dieter Basien's collection, which is illustrated at p. 214 of the Basien-Hoffkamp rate book. But other examples likely remain to be discovered. I would welcome scans of any examples the readers might have secreted away in their collections. 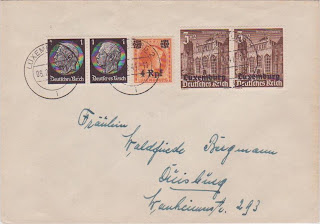 2(b) ─ Illegal uses (with and without penalty): As Gilhousen points out, before , the 1-Rpf. Hindenburg could only be used to pay the 1-Rpf. franking required for locally mailed newspapers. However, occasionally the 1-Rpf. Hindenburg was used, albeit illegally, in combination with other stamps where one or two Reichpfennings were needed to exactly make up a rate as the lowest denomination Hindenburg overprint was the 3 Rpf.

Illus. 2 shows an illegal use of a pair of the 1 Rpf. making up the 20-g, 12-Rpf. letter rate in combination with a pair of the 3+2 Rpf. overprinted Winter Welfare semi-postal and a 4-Rpf. Charlotte surcharge on a letter posted , to . However, no penalty was assessed despite the illegal use. Illus. 3 shows a similar un-penalized illegal use on an 82-Rpf. registered, special delivery cover. 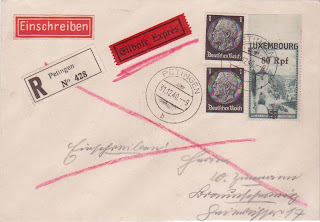 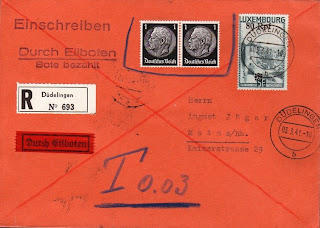 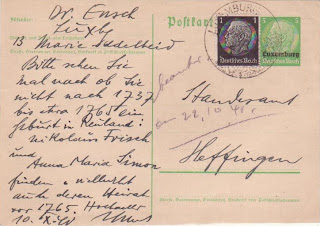 Illus. 5 - Legal Use of the 1-Rpf. Hindenburg on October 10, 1941, to uprate a 5-Rpf. local-rate postal card to the 6-Rpf. domestic postal card rate, sent from Luxemburg to Heffingen. 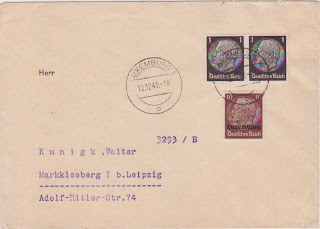 Illegal use of the 1 Rpf. Hindenburg can be explained in several different ways. Some might have used the low denomination stamp out of sheer frugality or for convenience; others may simply have been ignorant of the rather strange prohibition against general use of the 1 Rpf. stamp in Luxembourg before April 1, 1941. And, of course, still others may have had philatelic design in mind, as this is a period during which philatelic contrivances abound.

Keep the dates shown in Table 1 in mind when you rummage through dealers’ dollar boxes or scrutinize the offerings in auctions and on the Internet. And don’t forget to share your findings with me!

Many philatelic treasures from the World War II occupation remain to be discovered. Non-philatelic uses of the higher denomination overprinted Hindenburgs tend to be found mostly on commercial international airmail covers to North and South America. But sole use of the lowly 1-Rpf. un-overprinted Hindenburg can be found only on newspaper wrappers used between October 1 (or possibly November 30) and December 31, 1940. This use is undoubtedly the scarcst of all the Hindenburg uses in Luxembourg during the World War II occupation. Happy hunting!

[1] Mixed and Hindenburg frankings were allowed (some say "tolerated") on October 1 and October 2.