Was Use of Postal Stationery Cutouts Ever Permissible in Luxembourg?

We occasionally see cutouts from postal stationery used as postage.  I’ve always been uncertain whether this practice was permitted within Luxembourg (and within the UPU mails generally).  In Great Britain, for example, the postal use of cut-outs was banned under the Post Office Act of 1870 when wrappers and postal cards were introduced. This prohibition remained in force until 31 December 1904.  And the current United States Postal Service Domestic Mail Manual at 604 Paragraph 1.3(d) provides, in part, that stamp imprints cut from stamped envelopes, aerogrammes, or stamped cards are invalid to pay postage for U.S. domestic or U.S.-originated international mail.

But what about Luxembourg? 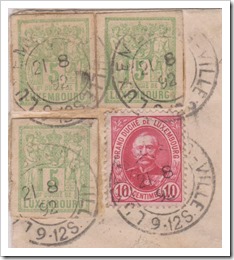 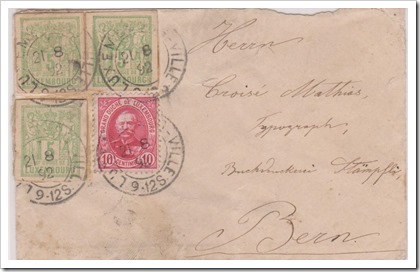 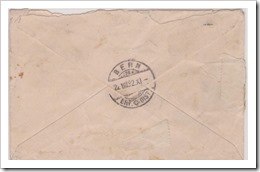 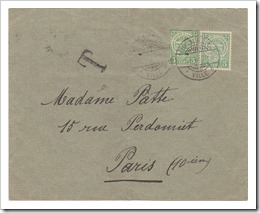 Luxembourg-Ville, 5 Feb 1915?, on a 10c/20g letter to Paris, France,
with reverse cachet of the Carmelites Tertiaires, Luxembourg 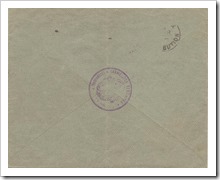 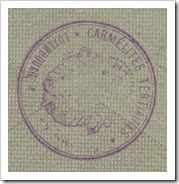 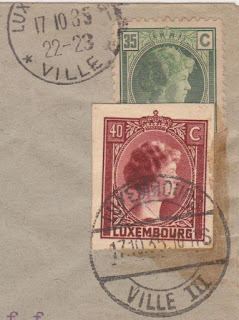 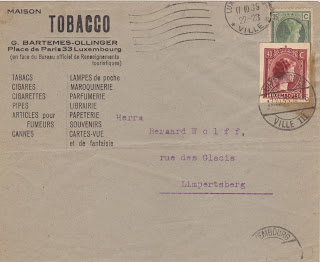 Luxembourg-Ville, 17 Oct 1935, to Limpertsberg
at the 75c Domestic Letter Rate 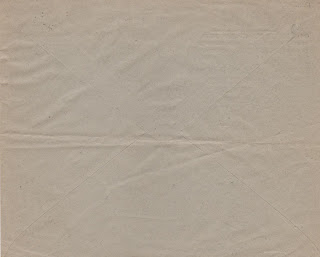 Posted by Arsdorf at 5:49 PM No comments:

In the preceding post, I pointed out that treasures lurk in old stocks of postal cards.  Here’s another example.

On its face, this 5c Adolphe (2nd issue) postal card offers nothing very special—just a Luxembourg-Ville 1906 cancel and 5c uprating paying the 10c rate to Belgium, hardly an exotic destination.  But wait a moment, please.  Take a look at the printed back.  The card is from and signed by Charles Bernhoeft (1859-1933), the esteemed publisher of many of Luxembourg’s finest early postcards.  He became the court photographer in 1891.  His prolific work is widely sought after today by deltiologists.  Edmond Thill showcases Bernhoeft’s work in his recently published, 800-page reference Charles Bernhoeft: Photographe de la Belle Epoque, which contains over 1,000 Bernhoeft photographs. 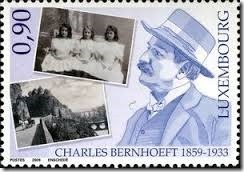 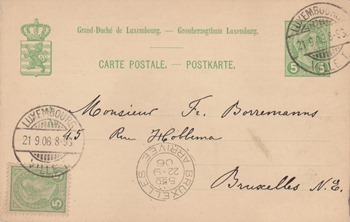 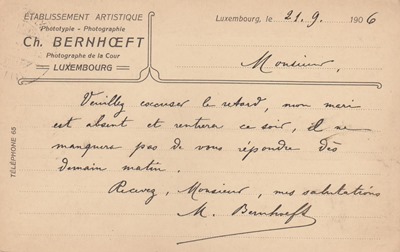 Posted by Arsdorf at 2:36 PM No comments: 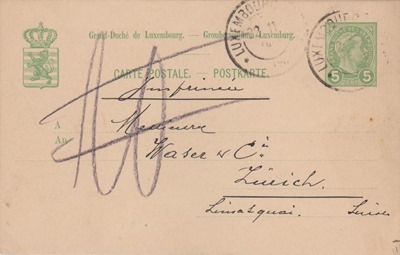 The 5c Adolphe (2nd issue) postal card was intended for domestic use, but here this example was sent to Zürich, Switzerland.  Of course, the UPU postal card rate was 10 centimes during the period that the Adolphe cards were valid, so why did the receiving clerk first mark the card “10” (for double a 5c deficiency), but then later cross out the marking?

A close examine reveals that the sender had inscribed the card Imprimé, thus enabling the card to travel at the 5c per 50g UPU printed matter rate.  And from that observation, I now understand why the back side contains only a blue rubber-stamped message (apparently good enough for the card to pass as “printed matter”).

Don’t pass up postal history gems like this when digging deep into dealers’ boxes of otherwise ordinary (and often over-priced) old cards!  You’ll find treasures amidst the trash, for sure. 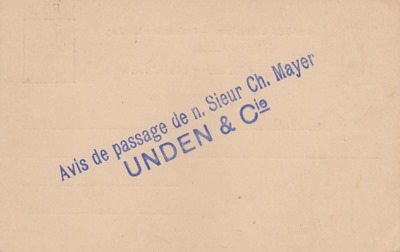 Posted by Arsdorf at 1:37 PM No comments: