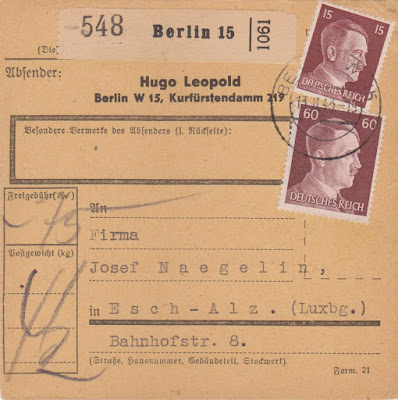 In August 1943, the war was not going well for the Third Reich.  Key industrial centers were being subjected to extensive Allied bombing.  Consequently with rail lines disrupted, this 4.5 kg parcel from Berlin to Esch-Alzig took 25 days to be delivered.  In the pre-WW2 era, next day delivery would have been normal. 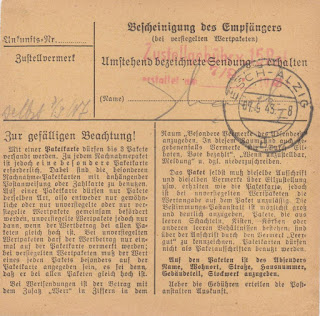 The red handstamp indicates that the parcel was picked up at the post office and the 15 Rpf. delivery fee refunded.

The parcel cards often suggest interesting stories. Add your imagination -- when I see parcels sent from the Ardennes villages, I imagine a sack of Gromperen being sent to hungry town-dwellers in Luxembourg-Ville, where there were wartime food shortages!

And what do you think Hugo Leopold in Berlin sent to Josef Naegelin in Esch-Alzig?

The parcel cards are a much neglected aspect of Luxembourg postal history.  The best reference for the study of WW2 German parcel cards is Paul-Jürgen Hueske, Der Paketdienst im Deutschen Reich 1933-1945.  It's Volume 47 of the INFLA Bücherei published by the Verein der Deutschlandsammler E.V. in Berlin.

Send me scans of your favorites.  I'll publish them here!
Posted by Arsdorf at 8:55 PM No comments: