The English expression  hanky-panky refers to activity that is devious or mischievous.  A common form of philatelic hanky-panky is the use of stamps prior to their official release date.

Consider the Souvenir II cover below: 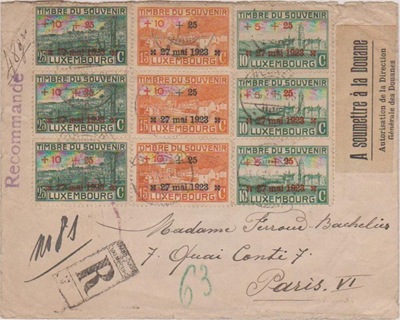 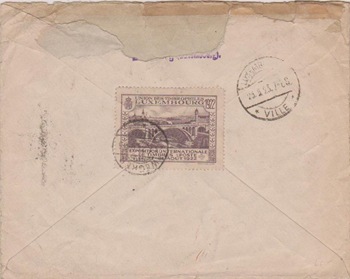 The Souvenir II surcharges were issued on May 27, 1923 -- the date shown on the stamps.  But the vertical strips of three on this 48-gram registered cover to Paris are postmarked at Wecker on May 23, 1923 -- four days earlier.  Even the poster stamp on the back is tied by a Wecker May 23rd cancel.  And there is also a Luxembourg-Ville transit dated May 23rd.

That the return address on the envelope flap has been torn off also suggests hanky-panky.  Even today premature use of Luxembourg stamps is unusual, and certainly such use in the 1920s must have been a serious violation of government policy.  But knowledgeable collectors know that this cover was not the only hanky-panky that emanated from a certain entrepreneur in Wecker (and Berbourg)!

French customs was also curious.  The customs label indicates that the letter was to be held for customs inspection!

The handed-back cover below shows the stamps actually canceled on the first day of issue: 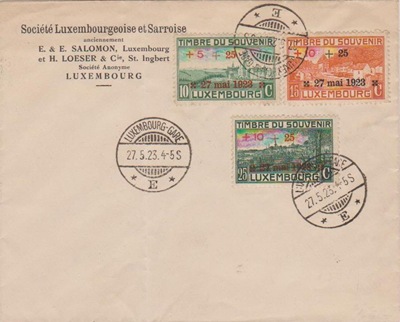 Posted by Arsdorf at 8:24 PM No comments:

Under the Treaty of Versailles, the Saar area was occupied jointly by the United Kingdom and France. In 1920, Britain and France established a nominally independent occupation government in an area separated from the previous Prussian Rhine province (main part) enlarged by two Bavarian districts (Homburg and St. Ingbert) ceded from the Palatinate.

This arrangement was sanctioned by a 15-year League of Nations mandate.   During the post-World War I mandate, mail from Luxembourg to the Saar Protectorate was charged the UPU rate.  Only after the Saar was returned to Germany did the German treaty rates again apply, beginning March 1, 1935. 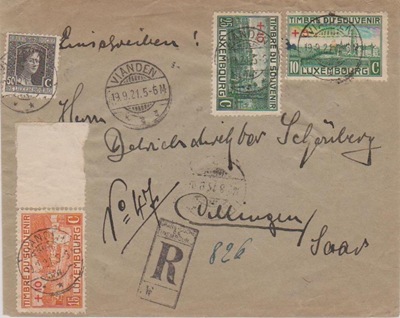 Check the covers in your collection posted between 1920 and 1935 to the Saar Protectorate.  Were they correctly rated? 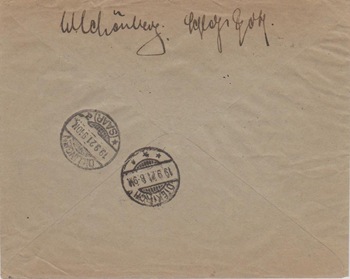 In an earlier post, I showed covers paying the special post-World War II rates to the Saarland that were in effect from 1949 to 1958.  You can find the post here.

Posted by Arsdorf at 2:01 PM No comments: