The first six-centime Arms postal card was issued in a quantity of only 3,000  on June 16, 1874, to pay the 6c German treaty rate.  Used examples are scarce, the entire printing having sold out in only two months.  It's so scarce in fact that in 50 years of collecting, I had only acquired two used examples until the remarkable card shown below surfaced in a bourse dealer's acquisitions.  And I don't recall seeing a used PC2 in the François Kaufmann collection when it was exhibited at Finland's FIP postal stationery exhibition in the 1980s. 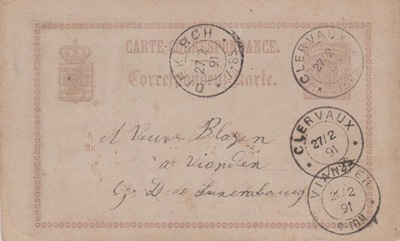 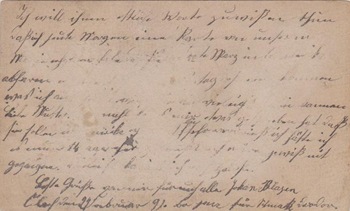 Here we see this homely gem, printed locally by Pierre Bruck with a basic printing press, used domestically nearly 17 years after issuance.  This was well into the period when Luxembourgers were using the high-quality Allegory postal cards printed in Holland in large quantities by Enschedé using then state-of-the-art printing technology.
The three double-circle cancels show the card postmarked at Clervaux 1:00-2:00 p.m. on Friday, February 27, 1891, received in transit at Diekirch 7:00-8:00 p.m. the same day, reaching its destination of Vianden at 9:00-10:00 a.m. the next day.
Some of my philatelic friends in Luxembourg opine that out-of-period uses of the postal stationery were the work of collectors.  This and others in my collection suggest that that was often not the case.  The frugal Luxembourgers of this era weren't about to waste six centimes when an old forgotten card turned up.  By 1891, the German treaty rate was ten not six centimes, but the domestic postal card rate remained at 5 centimes and the first-issue cards were still valid (they weren't demonitized until December 31, 1905).  So the writer lost only one centime when he used this 6c card to send his message across the Luxembourg Ardennes from Clervaux to Vianden!
Posted by Arsdorf at 1:57 PM No comments: 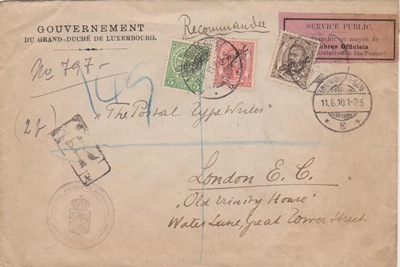 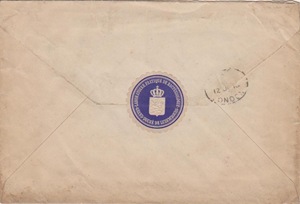 I was intrigued by this William IV official cover for two reasons.  First, it features an uncommon postal label; second,  the addressee — ‘The Postal Typewriter’ — is unusual.

The cover was sent from Luxembourg-Gare, 11 June 1910, by the Grand Ducal Laboratoire Pratique de Bactériologie to 'The Postal Typewriter' in London, England.  The London oval backstamp dated 12 June 1910 and the laboratory's seal are seen on the back.  The 65-centime official franking pays the UPU registry fee (25c) and postage (40c for a second-step, 20-40 g letter). 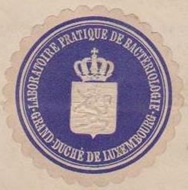 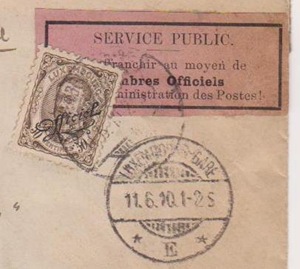 From my philatelic colleagues in Luxembourg, I've learned that during this era government agencies could instruct the post office to frank their official mail with official stamps.  This was done by use of purple Service Public labels, which mandate in French:
Affranchir au moyen de
Timbres Officiels
Administration des Postes!

Or, I'm told, sometimes 'S.P.' was simply written on the envelope, and official stamps would be pasted over the handwritten instruction.

Here's another example of the Service Public label used by the laboratory, now with its name in the cachet in German -- the Bakteriologisches Staatslaboratorium: 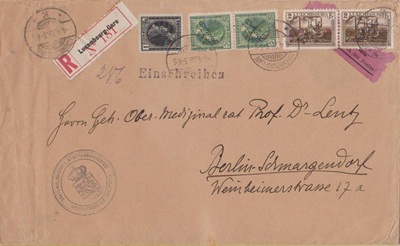 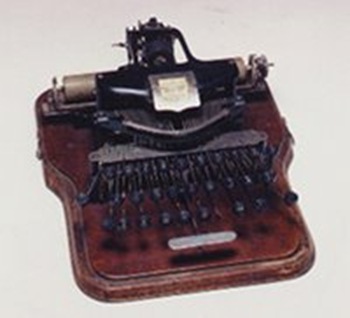 A postal historian can never be too curious.  Thanks to Google and Bing, I now know that classic typewriters are just as collectable as classic stamps.

One website —The Classic Typewriter Page  here — provides this account of the Postal Typewriter (and the photo shown above):

The Postal was an appealing portable typewriter that used an interchangeable hard-rubber typewheel and a three-bank keyboard with double shift. The Postal was invented by William P. Quentell and Franklin Judge. It was introduced in 1902 by the Postal Typewriter Company, based first in New York and then (1904) in Norwalk, Connecticut. It was made until 1908 or shortly thereafter.


The Postal originally sold for $25 ($27.50 with a veneered oak case) -- a nice price compared to the "standard" machines, which cost $100. The company boasted that theirs was "the only low-priced Typewriter combining Universal Keyboard, Powerful Manifolding and Mimeograph Stencil Cutting." With features such as these, the Postal enjoyed some popularity; the company employed 2,000 salesmen in the U.S., and the typewriter was exported to Great Britain, Germany, Austria, France, and even Russia.

In the early 1900s, when the phone was not ubiquitous and telegraphs were inconveniently located outside the home, the mail, or the post, was convenient because messages were delivered three times a day. . . . With a Postal Typewriter, people could write a quick letter -- a post card -- and have it delivered by the day's end. . . .

Perhaps that's why Luxembourg's bacteriology laboratory was writing in 1910 to The Postal Typewriter.  Their letter was addressed in long hand.  I wonder if they later purchased a Postal Typewriter.  Covers in subsequent years might reveal the answer.  However, the laboratory's label shown below -- posted 12 May 1919 to Brussels with combination official franking totaling 1.40 F postage and registry fee -- is hand addressed! 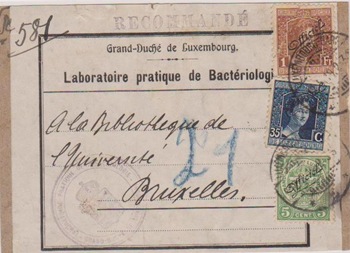 Posted by Arsdorf at 5:04 PM No comments: 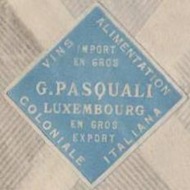 Elegant ephemera such as this is scarce but often little appreciated and seldom collected.  Yet the unmistakable beauty of this eminently collectible seal deserves to be preserved in a postal history collection for others to enjoy.  Imagine the thoughtfulness that went into its design. 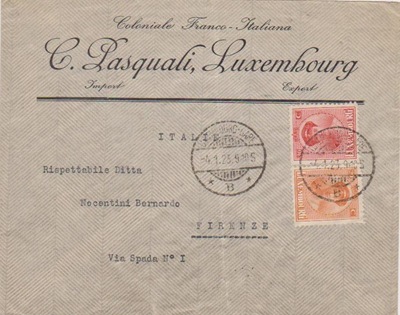 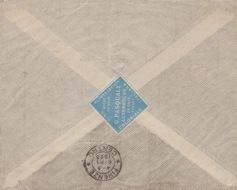 Posted by Arsdorf at 8:21 PM No comments: 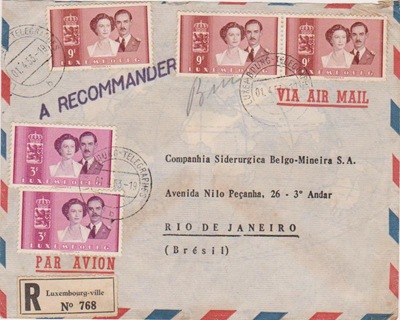 During the decade after World War II, Luxembourg followed a conservative new issue policy, limiting the number of commemoratives issued and choosing carefully the subjects  commemorated.  Except for the annual Caritas and other semi-postal or philatelically inspired issues, we have only the following:
Finding commercial uses of each of these 30 stamps is a challenge worth undertaking.  Covers exist, but considerable perseverance is necessary to unearth them, with the lowest and highest denominations sometimes proving the most challenging to find.

Because I especially enjoy the attractive 1953 Royal Marriage issue, over the years I've filled an album with uses of this issue on cover, but none is quite as charming as the recently-acquired commercial cover shown here.  Posted early on the evening of 1 Apr 1953 at the Luxembourg-Telegraphes window of the main post office, the cover, which is from the ARBED's central administration, was sent by registered airmail to an ARBED affiliate, the Companhia Siderugica Belgo-Mineira S.A., in Rio de Janeiro, Brazil.

That's a total rate of 32 F.  The three 9 F and two 3 F Marriage stamps make-up a convenience franking of 33 F.  (The absence of a 1 F denomination in the Marriage set probably explains the overfranking.)

I occasionally see commercial mail from the ARBED to its Brazilian affiliate, correctly rated with attractive commemorative franking.  The ARBED cover shown above provides the added pleasure of first day commemorative use plus a cancel we don't often see used on letters. 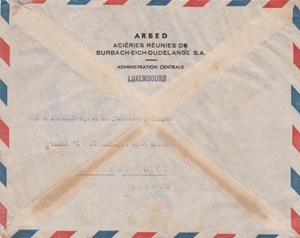 Posted by Arsdorf at 9:17 PM No comments:

Grenville Clark (1882-1967) was a distinguished American corporate lawyer remembered for his efforts to promote world peace through world law.   In 1985, the 39c denomination of the Great American series was issued in his honor [Scott #1867 seen above].

The interesting cover below was sent to Clark in Dublin, New Hampshire, where he resided, by Grand Duchess Charlotte's staff, but was initially directed to Dublin, Ireland, as no destination country was indicated in the typed address.  Dublin, Ireland is much better known than its namesake in the United States state of New Hampshire.

And the clerk added "USA" to the address, along with blue crayon X's, redirecting the cover to Dublin, New Hampshire, USA. 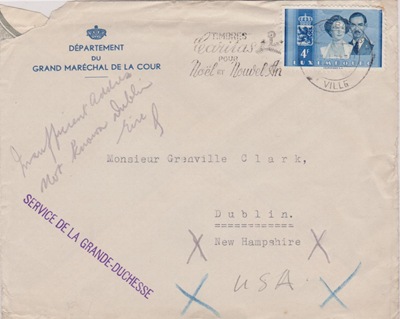 This cover initially appealed to me as an unusual example of redirected official mail, having been missent to Ireland.  But it is interesting from several additional perspectives as well.  Apart from having been sent to a famous person, it's a nice sole use of the 4 F Royal Marriage issue, with the attractive blue commemorative paying the 20 g UPU surface letter rate that was in effect from 1 Jan 1949 to 15 Jul 1958.  Likewise, the machine slogan cancel dated 9 Jan 1954, urging use of the annual charities semipostals, is certainly collectible.  More significantly however, this is mail from the Royal household, as shown by the corner card reading Département du Grand Maréchal de la Cour and the purple straight-line auxiliary mark indicating SERVICE DE LA GRANDE-DUCHESSE.

Yes, this engaging postal history cover shows minor damage, but the sale price on eBay was only $2.58.  Y0u never know when another bargain like this might up on the world's biggest flea market!

We could use a few more Grenville Clarks these days, as philately ebbs and the world becomes increasingly chaotic.  I could say more, but this is a philatelic blog.

Posted by Arsdorf at 8:23 PM No comments: