The Alsace-Lorraine (in German: Elsaß-Lothringen) was a territory created by the German empire in 1871, after the annexation of most of the Alsace and the Moselle region of the Lorraine in the Franco-Prussian War as part of the Treaty of Frankfurt.  French troops entered the Alsace-Lorraine in November 1918 at the end of World War I, with the territory reverting back to France under the Treaty of Versailles in 1919.
In 1870, at the beginning of the German annexation, a set of postage stamps was issued for the Alsace-Lorraine.  But on January 1, 1872, these stamps were replaced by stamps of the German empire.
However revenue stamps for the Alsace-Lorraine continued to be issued throughout the annexation, including those to tax railway carriage of goods contracts (in French:  Lettres de Voitures).
Of particular interest for Luxembourgian philately are the four revenue stamps issued in 1903 for use in connection with goods transported on the branch railway line [or Nebenbahn] from Diedenhofen (today: Thionville) in the Alsace to Mondorf-les-Bains in Luxembourg.  They are shown below:

The design is the same as that used for the main German railway in the territory -- the Reichs-Eisenbahnen in Elsass-Lothringen.  The text reads:
"Nebenb.  Dieden-/hofen-Mondorf."
The stamps are typically found perforated on some sides and rouletted on others.  The Yvert & Tellier Catalogue des Timbres Fiscaux et Socio-Postaux de France says the stamps rouletted on all four sides are scarce.
Similar revenue stamps were issued in 1905 for the  branch line connecting the Alsatian towns of Rosheim and St. Nabor.
Who has seen examples on documents?  Canceled examples of the 30 Pf. and 40 Pf. and a 1915 Frachtbrief from the line can be seen on this wonderful website:  http://www.rail.lu/lignesfr/lignethionvillemondorf.html
Your Luxembourg railway cancel collection won't be complete without the Diedenhofen-Mondorf railway cancel on a loose stamp or document!
Posted by Arsdorf at 7:20 PM No comments:

Louis Aston Knight (1873–1948) was a French-born American artist noted for his landscape paintings. One of his paintings, The Afterglow, was purchased by U.S. President Warren G. Harding in 1922 to hang in the White House.
In early 1907, Knight met Caroline Ridgeway Brewster (1882-1959), a distant cousin from Rochester, New York, while she was traveling through Europe with her mother. Knight returned to America with Caroline in October; they married in Raritan, New Jersey. The couple settled in Paris, but lived in New York during WWI, moving back again to the United States in 1940 after the occupation of France, where they remained until their deaths.

This letter from the United States Foreign Service in Luxembourg-Ville postmarked November 30, 1949, was sent to Louis Aston Knight's widow in New York City the year after his death.  The address--114 East 84th Street--is an eight-floor apartment building built in 1915.

A thousand years from now, covers like this will be remembered as relics of the pre-electronic mail era.  So you'd better save 'em now!

If only it were still on cover ... 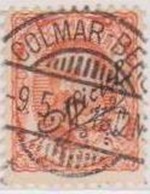 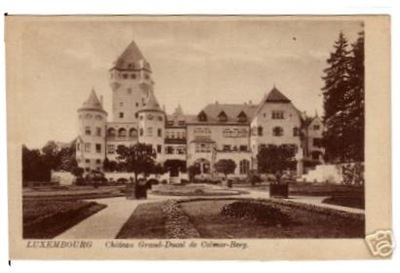 Grand Ducal Chateau at Colmar-Berg
Fine used stamps evoke fantasies of the covers from which they were removed.  That's especially true when the cancel is that of Colmar-Berg, where much mail from the royals originated!
The high denomination official stamp shown above might have franked a money letter sent back to Hohenberg in Bavaria, seat of the Nassau-Weilberg dynasty (such as the one shown below).  Of course, we'll never know for sure. 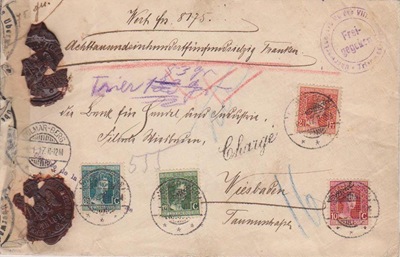 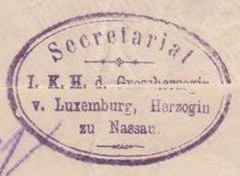 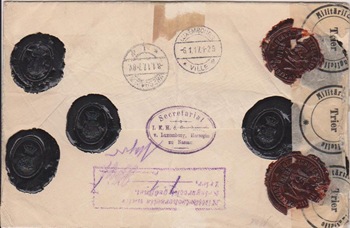