To my knowledge, almost nothing has been written about the official seals used by the Luxembourg postal service to officially seal or reseal  damaged incoming or outgoing mail.  This is surprising as postal historians have recently shown a keen interest in this aspect of postal history.

The fine website Officially Sealed Mails of the World at  www.poseal.com is devoted to documenting and displaying worldwide official postal seals.  According to the website author, Todd A. Hirn, "The earliest recorded on-cover use of an official seal was in Italy in 1864."  He says that official seals have been recorded from some 185 countries.  However, he notes that few countries continue to use post office seals today.  Most postal authorities now use special tape to repair damaged mail, or they enclose badly damaged items in plastic 'body' bags.

Surely the readers of this blog can help me document the official seals that the Luxembourg post has used.

Here are three examples of such mail.  These imperforate translucent glassine seals were used to repair damaged mail.  They are easily differentiated by their fancy corner ornaments, the text and text font. (I classify them separately from the attractive small embossed seals that the Luxembourg post and many other government agencies once used to "seal" their outgoing mail.) 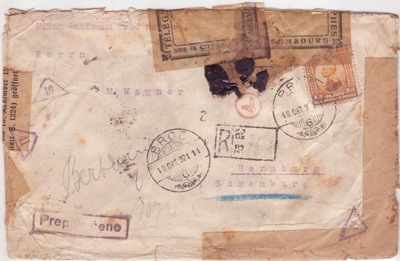 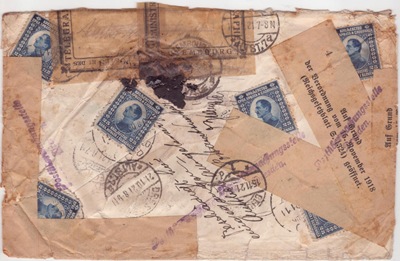 The letter was initially routed to Dresden, Germany [cds 21 Oct 1921], where it was opened for inspection under the German currency control laws and officially resealed.

Due to the misspelling of Berbourg, the letter was missent from Dresden to Bernburg, Germany [on the back:  Bernburg cds 14 Nov and 15 Nov 1921].

The letter was then redirected to Luxembourg-Ville [cds illegible].  As it was extensively damaged, it was officially resealed before being sent on to its destination in Berbourg [post:  Wecker cds, 17 Nov 1921]. 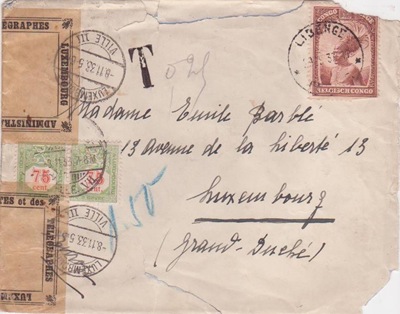 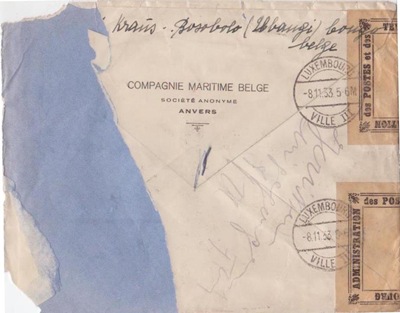 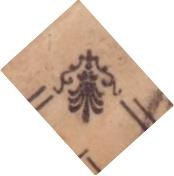 Letter from Libenge, Belgian Congo [today:  Democratic Republic of the Congo] posted 29 Sep 1933 to Luxembourg-Ville.  The 1.25 F Belgian Congo pictorial only paid the treaty rate to Luxembourg for a 20-gram surface letter.  An additional 75c postage was required for second-step (20-40 gram)  letters, as apparently was the case here.  The 75c deficiency was doubled upon receipt in Luxembourg-Ville, 8 Nov 1933.

1936 letter from
Luxembourg-Ville to Berlin, Germany
damaged by the machine canceller 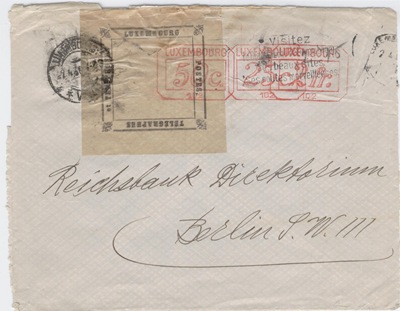 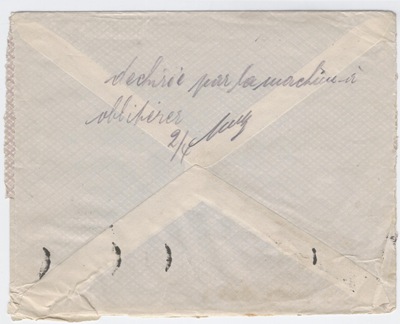 Meter mail machine cancelled at Luxembourg-Ville, 2 Apr 1936, posted to Berlin, Germany.  The postal clerk's pencil notation in French on the back reads "damaged by the machine canceller."

The meter franking of 2.75 F pays the treaty rate to Germany for a third-step, 40-60 gram letter.  The thickness of this heavy letter probably was the cause of the damage from the machine canceller.

The letter has been repaired with an official seal that reads:

Posted by Arsdorf at 3:08 PM No comments: 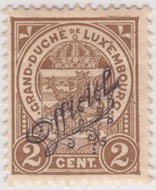 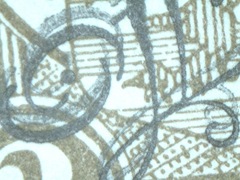 I was pleasantly surprised to find this double overprint in a box of Luxembourg stamps on old printed album pages.  I had cannibalized these album pages years ago, taking out the used stamps, especially those with interesting cancels, to be soaked and sorted.  Now, years later, I've finally gotten around to removing the mint stamps.  This unexpected discovery made my long delayed effort seem worthwhile!

Has anyone else found this stamp with a double overprint?

Postcards that had to pay the foreign letter rate! 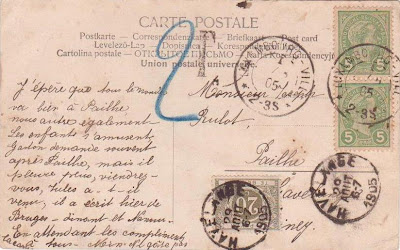 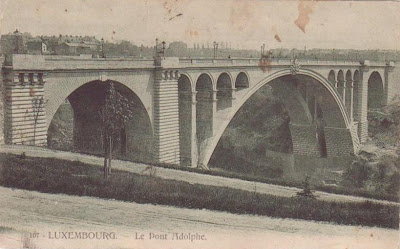 From 1902 to 1907, certain postcards had to be franked at the foreign letter rate.  The picture postcard shown above illustrates this fact.  I doubt that many postal historians could correctly explain the rationale for the regulation.

The postcard was sent on August 28,1905, from Luxembourg-Ville to Havelange, Belgium.  It was franked with a pair of the five-centime Adolphe definitive correctly paying the ten-centime UPU postcard rate.  But nonetheless it was taxed 20 centimes on August 29th upon arrival in Havelange.  Why?

The letter rate from Luxembourg to Belgium in 1905 was 20 centimes.  Thus, this divided-back postcard was correctly handstamped "T" [taxe] and marked "2" in blue crayon  [for two gold centimes], indicating the  ten-centime letter-rate deficiency, which was doubled and collected from the recipient at Havelange!  (Prior to October 1, 1907, the deficiency rather than the amount due was indicated.)

Thanks to the Internet, these days it's easy to acquire scarce Luxembourg stamps and covers if your bank account is sufficiently large.  But you can't buy the philatelic knowledge required to appreciate postal history gems like this postcard.  That takes dedicated research!

Who has a divided-back postcard posted from Luxembourg during the period from 1902 to October 1, 1907, that is properly franked at the foreign letter rate to the country of destination?  I'm still looking for that gem! 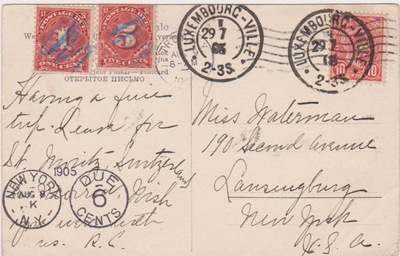 Divided back postcard sent from Luxembourg-Ville, 7 Jul 1905, franked at the 10c UPU rate for undivided back postcards.  At the New York exchange office, 8 Aug 1905, taxed six US cents (= 30 centimes) = double the 15-centime deficiency, the UPU letter rate from Luxembourg to the United States then being 25 centimes.   Troy, New York machine cancel, 9 Aug 1905, for delivery to Lansingburg, New York. 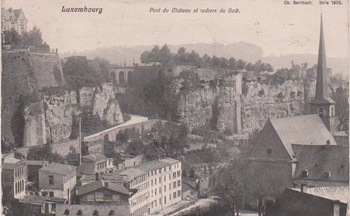