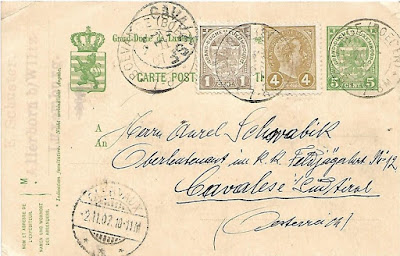 Apart from the unusual mixed uprating, I was confused by the destination -- Cavalese in Sud/Tirol, Osterreich. Isn't Cavalese, South Tyrol, part of Italy? Yes, but in 1907 it wasn't. South Tyrol, situated at the northernmost point of Italy, was formerly part of the Austro-Hungarian Empire. It was not annexed to Italy until 1919, after World War 1. Thus, the card is correctly addressed to Cavalese in Sud/Tirol, Osterreich.

Even cards as common as this 5-centime Arms card offer collecting challenges.  Intended to pay the domestic rate, uses can be found from the country's many small villages.  I especially like village-to-village uses.  Uprated UPU uses to other than neighboring countries are also difficult to find.  And in this instance the mixed uprating itself is uncommon.  No surprise that the return address is that of a stamp collector -- E. Schuster, Allerborn b/Wiltz!

The ten-centime UPU rate remained in effect until 10 May 1921. 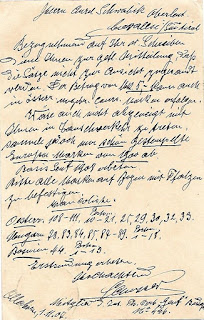 Posted by Arsdorf at 2:10 PM No comments: