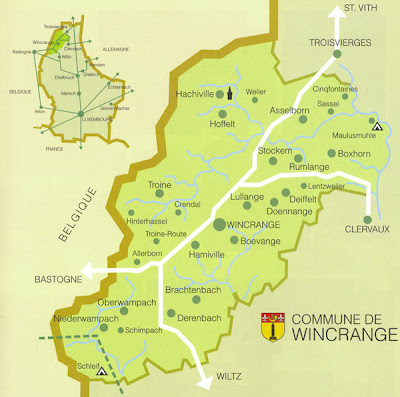 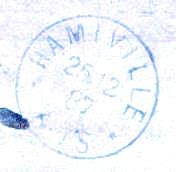 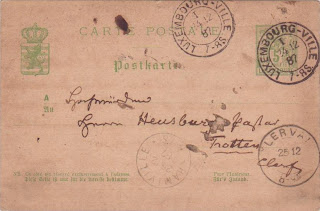 In the 19th and early 20th centuries, Luxembourg's many small rural post offices provided a means of remarkably efficient communication well before the advent of the telephone or electronic mail! This very common five-centime Allegory postal card provides a fine example.

On Christmas Eve 1887 (a Saturday), this postal card was written in Latin by a priest in Luxembourg-Ville to the parish priest in Trotten (now called Troine), a tiny hamlet that did not have (and never has had) a post office. Leaving Luxembourg-Ville between 7 to 8 p.m., Christmas Eve, it was received in Clervaux between 8 and 9 a.m. the next morning, a Sunday. From there is was dispatched to Hamiville, another small hamlet whose only post office operated from mid-August 1881 to the end of 1888. The Hamiville cancel shows that the postal card was received between 6 and 7 p.m. Christmas Day 1887 for delivery to nearby Troine. You can see the close proximity of Hamiville and Troine on the map.

Because Hamiville's post office only operated for a few years in the 1880s, it had just one canceling device -- the single circle canceler that was used to document receipt of this card. The Hamiville single circle cancel is quite scarce on outgoing mail. This is the first example I've seen of it used on incoming mail.

As of January 1, 1889, responsibility for handling mail for Hamiville (and presumably Troine) was transferred to Boevange (Clervaux), thus ending Hamiville's postal history! 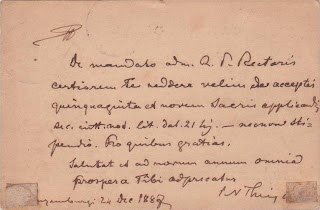