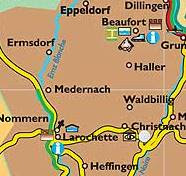 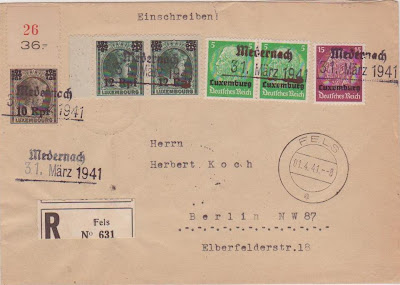 Philately of the German occupation of Luxembourg abounds with postal history not seen during any other period of Luxembourg's philatelic history. In this regard, the registered cover shown here is exemplary for three reasons.

After having been posting at Medernach, the letter had to be registered elsewhere (in this case, the next morning at Larochette [in German: Fels], which was the closest post office with registry service). At the time, Medernach had only the services of a parcel post agency (an agence aux colis), and presumably this agency lacked authority to register letters.

Second, the cancels used at Medernach during the WWII occupation are distinctive. Two types exist -- the one shown with Medernach in Gothic letters, and a similar type but with Medernach in Arabic letters. The German administation never issued its standard, round double circle bridge cancel to Medernach (Type 41), perhaps because Medernach was only a parcel post agency. However, when the cover was registered at Larochette, the German Type 41 cancel of Fels is seen on the cover along with the Fels registry label.

And last, the combination franking of Hindenburg and Luxembourg overprints is interesting in its own right. The date of posting at Medernach, Monday, March 31, 1941, was the last day of validity of the Luxembourg overprints, of which the 10-Rpf. on 40-centime and pair of the 12-Rpf. on 60-centime Charlotte (2nd issue) pay 34 Rpf. postage. The addition of 25 Rpf. in the form of a 15-Rpf. and pair of the 5-Rpf. Hindenburg overprints is puzzling as these stamps continued to be valid through the end of 1941. A first-step registered letter would have required only a 42-Rpf. franking (leaving the cover 17 Rpf. overfranked) and a second-step only a 54-Rpf. franking (leaving the cover overfranked by 5 Rpf.). Perhaps the sender was simple disposing of the Luxembourg overprints, which were about to become invalid, or had philatelic motives. In addition to being postmarked on April 1 at Fels, the cover is backstamped at Luxembourg-Ville the same day, and was received in Berlin, April 3, 1941.

What's your opinion of the postal history significance of this cover?
Posted by Arsdorf at 2:34 PM